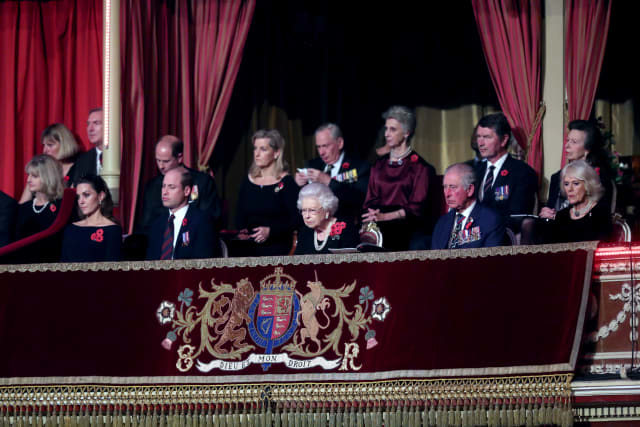 Figures compiled by PA Media show the number of the days worked by members of the monarchy during 2019 – with the Princess Royal leading the list.

Details of the monarchy’s official engagements are recorded in the Court Circular – a daily list of the events attended by the Queen and her family.

But it is understood some members of the royal family carry out private engagements in support of their public work, which may not be reflected by the Court Circular.

The Duke of Cambridge worked 74 days during the past 12 months, according to the Court Circular, while his wife the Duchess worked 58 days, but it is likely their respective figures may be higher.

Major events from their year include William and Kate’s tour of Pakistan, supporting the Queen during US president Donald Trump’s state visit in June, and attending other events in support of their own charitable projects.

As the parents of three young children – Prince George, aged six, Princess Charlotte, aged four, and Prince Louis who is 20 months old – it is thought they juggle childcare duties around their public work.

The Prince of Wales worked 125 days during the past 12 months according to the Court Circular, carrying out a historic visit to Cuba with the Duchess of Cornwall, who worked 84 days, and also touring Commonwealth nations in the South Pacific.

Charles attended royal engagements across the country during the year and just a few days before Christmas visited the village of Fishlake, near Doncaster, to meet communities affected by flooding.

The Queen, now in the 68th year of her reign, worked 67 days during 2019 and she still maintains a busy public schedule as her 94th birthday approaches in April.

Every day of every year, wherever she is, the Queen receives from government ministers, and from her representatives in the Commonwealth and foreign countries, information in the form of policy papers, Cabinet documents, Foreign Office telegrams, a daily summary of events in Parliament, letters and other state papers.

These are sent up to her by private secretaries in the red boxes also used by Government ministers to carry confidential documents.

The Queen spoke about the “bumpy” path her family has experienced this year in her Christmas Day address to the nation.

During 2019, the Duke of Edinburgh was involved in a dramatic car accident, the Duke and Duchess of Sussex spoke about their struggles living in the public eye and the Duke of York gave a disastrous television interview about his friendship with a convicted sex offender.

Andrew worked 90 days this year before he retired from public duties in the wake of the backlash from his interview on the BBC’s Newsnight programme.

Harry and Meghan’s first child Archie was born on May 6, and the days worked by the couple reflect the period of maternity they both enjoyed and the extended festive break they have taken.

The duke spent 70 days carrying out official engagements while the duchess worked 31 days.

The Princess Royal regularly tops the list of number of days worked by members of the monarchy and worked 165 days, while the Earl of Wessex worked 81 days.