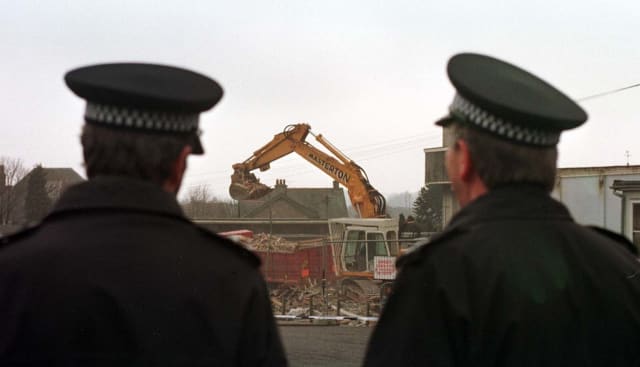 Grieving parents at Dunblane Primary School demanded an urgent clarification from John Major days after the 1996 massacre amid concern the government was about to renege on a pledge to help, a newly released letter reveals.

Gerry McDermott, spokesman for the school board of governors, sought answers from Downing Street after reports reached them that Scottish minister Michael Forsyth had backed down on a commitment to use state funds rather than public donations to rebuild the gym where Thomas Hamilton unleashed gunfire on a class of five and six-year-olds.

The prime minister and Mr Forsyth were among a delegation of state officials to visit Dunblane after the March 13 attack, and Mr Major confirmed to the head teacher that finding government cash for the project “would not be a problem”.

Mr McDermott said the gesture “was a source of great comfort” to the community, “relieving strain from those most closely involved”.

However, he accused the government of “manipulating” the community for political gain when he became aware of claims that ministers would abandon the idea in favour of using public donations instead.

In a letter to Mr Major on March 27, released by the National Archives at Kew, Mr McDermott wrote: “Such an apparent change of heart and broken promise is a cause of great distress in Dunblane.

“I, on behalf of the school board, look to you to clarify in writing exactly what the government will do.

“If there is no intention to fund the rebuilding of the gym, as you promised, this requires to be clearly stated so that the community knows where it stands.”

He said that if claims of Mr Forsyth’s U-turn were true, he wished “to put on record my extreme disappointment in the manner in which this bereaved community has been manipulated, maximising media opportunity, yet failing to deliver a widely reported promise of assistance”.

Mr Forsyth, in a letter responding the same day, told the governors there was no truth in the suggestion, adding: “I simply cannot understand where the report came from … we stand by (the) commitment.”

The Scottish minister – now Lord Forsyth – also conveyed his regret that the board decided to ask Mr Major for assurance directly before approaching him.

“A phone call to my office would have clarified the misapprehension,” he wrote.

The government later met the £2 million cost to refurbish the gym, which was pulled down in the days after the disaster.

Hamilton, 43, shot dead 16 children and their teacher, Gwen Mayor, shortly after 9.30am as they prepared to begin their class.

The killer, described by some neighbours as an oddball who was expelled from the Scout movement after exposing boys to extreme cold during two camping expeditions, turned the gun on himself moments later.

A tranche of newly released official correspondence following the Dunblane tragedy also revealed a handwritten note from Mr Forsyth to the prime minister, thanking Mr Major’s wife Norma for being “marvellous” during a visit to the grieving community.

“It cannot have been easy for her,” Mr Forsyth wrote.