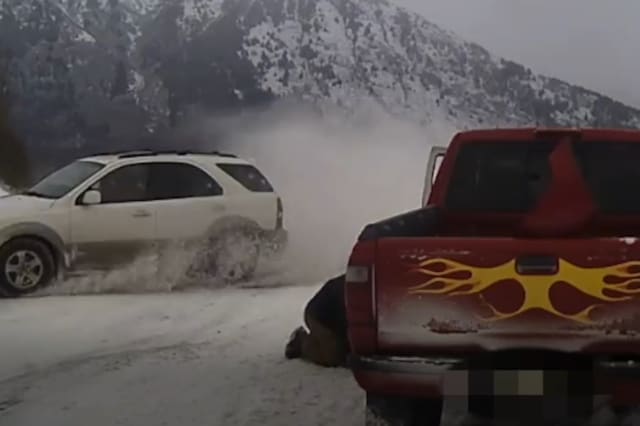 A driver had a lucky escape when a car skidded on snow and narrowly missed him as he crouched at the roadside examining his truck.

The incident, which happened on Christmas Day near Anchorage in Alaska, was captured on film by a police dash cam and shows an SUV losing control as it rounds a corner on the Seward Highway.

The vehicle is seen skidding within a couple of feet of a trucker who is examining his vehicle, narrowly missing him and spraying him with snow.

Police posted the video on Saturday, using the opportunity to remind motorists to slow down in wintry conditions.

In a Facebook post they wrote: "Had any tiny variable been slightly different in these 3 seconds, this could have been an incredibly tragic day. We're grateful that nobody was hurt.

"This serves as a critical reminder that, especially during these winter months where our roads are covered in ice and snow, everyone MUST exercise extra caution behind the wheel. Slow down. Plan ahead. Your life and the lives of others depend on it. Be safe out there."

Nobody was hurt in the incident.