What the Queen’s great-grandchildren got up to in 2019 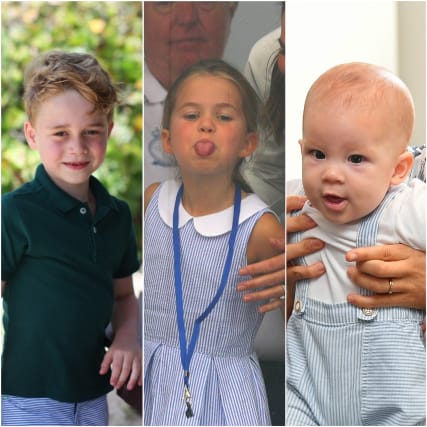 Royal youngsters explored a woodland wilderness garden, caused mischief at a regatta and welcomed a new addition to the family this year.

Milestone birthdays and a school start shaped 2019 for the youngest generation of Windsors, with the birth of Archie Mountbatten-Windsor meaning an eighth great-grandchild for the Queen.

Louis turned one in April, with the Duke and Duchess of Cambridge releasing images of the toddler, showing his rosy cheeks and two bottom front teeth.

He made his first appearance on the Buckingham Palace balcony for the Trooping the Colour celebrations.

Clapping and waving at the crowds, at one point Louis sucked his thumb as William held him.

William told children’s writer Julia Donaldson at an investiture that he was preparing to stage a “rowdy” birthday party in May for his daughter with lots of youngsters invited.

Photos were released of Charlotte in a floral summer Betsy dress by Trotters as she sat cross-legged on a patch of grass at her Kensington Palace home.

Kate this year revealed that Charlotte was “pretty good” with spicy food, and also liked olives and, on a trip to Belfast, she referred to her daughter by the nickname “Lottie”.

The fourth in line to the throne had fun poking her tongue out during the presentation ceremony at the King’s Cup regatta on the Isle of Wight, after the duchess had encouraged her to wave.

She arrived for her first day with her parents and George, looking a little nervous at first as she fiddled with her pony tail.

He made his world debut wearing a white bonnet and wrapped in a shawl in the grand surrounds of Windsor Castle, with his proud parents.

Meghan described him as having the “sweetest temperament”, adding: “He’s really calm.”

His place of birth was kept a secret until his birth certificate revealed he was born at the private Portland Hospital.

Like most royal christenings Archie’s was private, but Harry and Meghan also decided not to release details of their son’s godparents.

Archie later went on his first official royal tour when the Sussexes travelled to South Africa in September.

The royal baby stole the show by giggling, smiling and captivating the anti-Apartheid movement hero.

Harry said about his son: “He’s so busy, constantly wanting to stand.”

Meghan revealed how Archie was growing fast when she met military families at a coffee morning in Windsor in November.

“Archie just got two teeth. Two tiny ones, right there,” she said, pointing to the middle of her own bottom row.

– In the Chelsea Flower Show garden

There was a family outing for the Cambridges when they all explored Kate’s Back To Nature garden at the Chelsea Flower Show in May.

George gave his mother’s co-creation an impressive 20 out of 10 when asked for a rating by William.

The youngsters took off their shoes and paddled barefoot in the stream, with Charlotte shouting “Ooh la la” as she waded through the water.

When William asked Charlotte “will you help George?”, the princess – known for being feisty – retorted “no” before skipping off.

Louis was seen toddling around and having a go on the rope swing, as did William.

The children had all contributed to their mother’s garden.

They collected leaves, moss and twigs in the months before and Kate incorporated the foliage into the surroundings of the campfire.

Prince George celebrated his sixth birthday in July, with William and Kate releasing photos of their eldest.

He was seen proudly wearing an England football shirt and lying on the grass laughing, displaying his gap-toothed smile.

Football-mad George enjoyed a goal-filled afternoon with his family when he cheered on Aston Villa to victory in October.

The young fan was pictured enthusiastically jumping up and down in delight as he watched Villa romp to a 5-1 away win over Norwich in the Premier League match.

The prince was also revealed as a fledgling tennis player – after having a lesson from one of the sport’s superstars.

Roger Federer – George’s favourite player – visited the prince at the home of Kate’s parents in Bucklebury, Berkshire, and said “cute” George had a “good” technique.

– At the horse trials

The Queen’s other great-grandchildren had a day out at the Festival of British Eventing at Gatcombe Park in Gloucestershire.

Zara Tindall’s eldest daughter Mia poured a bottle of water over her own head to cool down after playing on the bouncy castle.

Savannah Phillips – the daughter of Zara’s brother Peter Phillips – gave her younger sister Isla a piggy back ride as they enjoyed the summer sunshine.