The New Year Honours list has been met with controversy, with awards for England's World Cup winners and top entertainers lauded while recognition for two prominent figures from politics and the legal profession has drawn condemnation.

Cricketers including Ben Stokes have been honoured for clinching the World Cup on home soil, while singers Sir Elton John and Olivia Newton-John have also received awards, as has filmmaker Sam Mendes.

But the bestowing of a damehood to former director of public prosecutions (DPP) Alison Saunders and a knighthood to ex-Conservative Party leader Iain Duncan Smith have sparked a backlash. 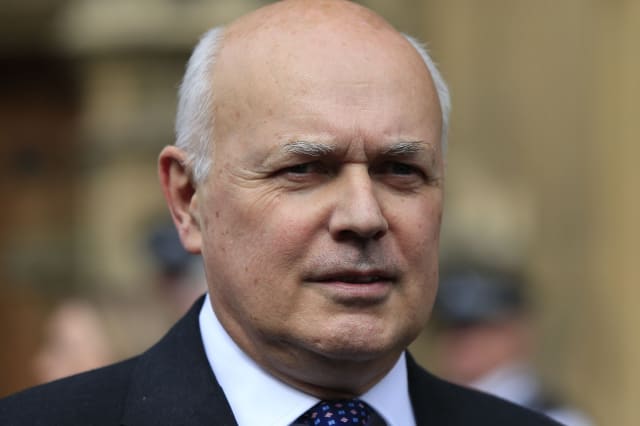 Dame Alison was made a Dame Commander of the Order of the Bath for services to criminal justice despite quitting the post last year after several controversies.

These included overseeing the infamous disclosure scandal, in which dozens of rape trials collapsed due to the late disclosure of evidence, leading to a review of every rape case in the country.

Dame Alison also attracted criticism for the handling of other sex crime allegations and investigations during her term, including claims made against the late Lord Janner and broadcaster Paul Gambaccini, who was paid a settlement over his wrongful arrest as part of Operation Yewtree.

Despite usual practice, Dame Alison did not receive an honour after quitting as head of the Crown Prosecution Service (CPS) in October last year.

Her award was believed to have been withheld after then prime minister Theresa May demanded an end to automatic honours for civil servants accused of failing in their roles.

He told the PA news agency: "She completely made a hash of my innocent late father's ridiculous allegations. These have now proved to be false like the allegation that 'Nick' made, and she presumed guilt and introduced, followed or continued a policy of all victims are to be automatically believed.

"As a result of this policy, it led to huge injustices against many well-known people and not so well-known people – people like my late father, Paul Gambaccini, Harvey Proctor and Lord Brittan, and many, many others.

"This is an appalling honour which brings the honours system into disrepute."

Dame Alison defended her award, telling The Times it was for "30 years of public service" and that it was unfair to describe it as reward for failure.

Sir Iain's honour, meanwhile, has been criticised as a reward for a "legacy of cruelty and failure".

As work and pensions secretary under David Cameron, Sir Iain was the architect of the Government's controversial Universal Credit welfare reforms.

Opposition parties said it "beggared belief" that someone whose policies had caused so much distress should be honoured in such a way.

Labour's Lisa Nandy said it was a "disgraceful decision by Boris Johnson to reward a legacy of cruelty and failure".

Writing on Twitter, she added: "This regime deliberately removed the safety net. It stripped people of their dignity. There is no honour in that."

A Labour Party spokesman said it was "unfortunate to see that one of Boris Johnson's first priorities" was to grant a knighthood to Sir Iain – the "primary architect of the cruel Universal Credit system, which has pushed thousands of people into poverty".

More widely applauded is the OBE granted to Stokes, a CBE given to his World Cup-winning captain Eoin Morgan, and MBEs to teammates Joe Root and Jos Buttler. Coach Trevor Bayliss is made an OBE.

Meanwhile, Sir Elton said he was "humbled" after receiving the highest acknowledgement in the honours list.

Having been knighted for services to music and charitable services in 1998, the 72-year-old has now been awarded the Companion of Honour.

"2019 has turned out to be a truly wonderful year for me and I feel extraordinarily blessed," he tweeted.

British-born Newton-John, best known for starring in beloved musical Grease, has been made a dame for services to charity, cancer research and entertainment.

"As a girl born in Cambridge, I am very proud of my British ancestry and so appreciative to be recognised in this way by the United Kingdom," she told the PA news agency.

Oscar-winner Mendes – who has directed two James Bond movies – receives a knighthood for his contribution to drama, and said he was "amazed, delighted and extremely proud".

Steve McQueen, director of 12 Years A Slave, also becomes a knight for services to film.

Elsewhere, schoolboy Ibrahim Yousaf is handed a British Empire Medal for raising thousands of pounds for his community in Oldham. He is the youngest person on the honours list at 13, contrasting a clutch of recipients in their 90s, including veterans of D-Day and the Battle of Arnhem.

D-Day veteran Harry Billinge, 94, whose fundraising efforts have made headlines around the world, is made an MBE for services to charity.

Battle of Arnhem veteran Wilfred Oldham, 99, from Bury, receives an MBE for services to commemorations and UK/Dutch relations in the Diplomatic Service and Overseas list.