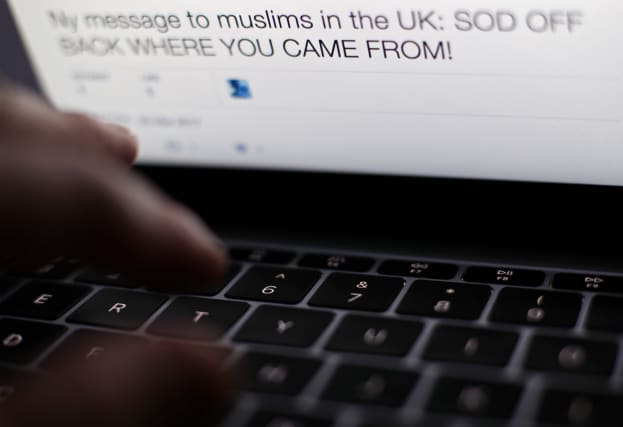 Fewer than 1% of cases investigated by the UK’s first police unit dedicated to tackling online hate crime have resulted in charges.

Scotland Yard has logged 1,851 incidents since its “online hate crime hub” was launched in April 2017, according to figures obtained by the PA news agency under freedom of information laws.

The data shows just 17 cases, or 0.92%, have resulted in charges, with only seven of those leading to prosecutions, while three more cases were pending a Crown Prosecution Service (CPS) charging decision.

There were 59 other positive results, which included cautions, harassment warnings, youth referrals, school interventions, apologies and other orders.

Conservative London Assembly member Susan Hall described the hub, which was set to cost £1.7 million over two years when it was launched by Mayor of London Sadiq Khan, as “an exercise in spin over substance”.

“With Sadiq Khan’s online hub delivering disappointing results and hate crime on the rise, it is clear that the mayor is failing to drive this disgusting discrimination and abuse out of our city,” she said.

“True to form, the mayor’s online hate crime hub has been an exercise in spin over substance. Khan can talk a good game and grab the headlines, but time after time he fails to deliver the change that London needs.

“The money splurged on this project could have been used to invest in additional police officers and protect Londoners from a whole host of crimes, including hate crime offences.”

The Metropolitan Police said the first pilot year of the online hate crime hub was funded by the Mayor’s Office for Policing and Crime (MOPAC), to the tune of £326,344.

A spokesman for the mayor of London said: “The mayor takes a zero-tolerance approach to hate crime in London and the hub is supporting victims and helping us respond to the growing threat that London’s diverse and minority communities are facing both on and offline.

“The Met has made huge progress in tackling all forms of hate crime but it’s clear more needs to be done.

“The police have City Hall’s full support in enforcing the law against anybody who commits these crimes.”

Scotland Yard said the unit now deals with both online and offline cases, reviewing every hate crime reported to the Met on a daily basis.

The low number of charges is thought to be due to the high CPS charging threshold for online hate, and the difficulties investigators face in obtaining information from social media companies.

But not all incidents reported to police are crimes and some complainants do not want to see charges brought.

A Met spokesman said: “The online hate crime hub was a one-year pilot project which ran from April 2017 to April 2018.

“Its role was to support officers across the Metropolitan Police Service in dealing with online hate issues and specifically to provide ‘attribution’ so that those posting hate could be identified.

“Officers working in the hub focused on reports that could be capable of proof, and passed those that fell below this threshold to colleagues from the charity Stop Hate UK for enhanced victim support, including liaison with social media providers to have offensive material removed.

“The hub’s role was not to investigate or bring prosecutions itself.

“The officers from the hub have taken the valuable experience and expertise they gained from this pilot and embedded it into our working practices within the Met’s safeguarding portfolio where they are available to give advice to officers dealing with all kinds of hate crime as well as identifying and promulgating best practice throughout the Met.”

But the Home Office statistics do not distinguish between crimes committed online and offline.

The Crown Prosecution Service also said it does not hold data which identifies the number of hate crime prosecutions where offending occurred online.

Hate crimes are defined as those perceived to be motivated by hostility or prejudice of a characteristic.

But some police forces log other types of hostility under hate crime, including reports of misogyny, and incidents where victims were targeted because of their age or membership of an “alternative sub-culture”, such as goths.