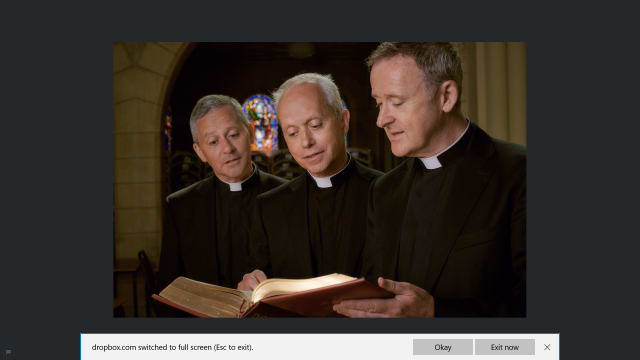 Northern Ireland’s singing Catholic priests have been made MBEs.

Father Eugene O’Hagan said the honour recognised music’s role in building connections across the community between Catholics and Protestants.

The Priests hit the big time in 2008 when the trio’s classical religious melodies became known internationally.

Fr O’Hagan said: “Music is a great bridge. It has been an enriching experience on both sides.”

The performers – Fr O’Hagan, his brother Father Martin O’Hagan and Father David Delargy – were honoured for their music and charity work.

The priests nurtured their musical talents from their early days together as students at St MacNissi’s College, Garron Tower, Co Antrim.

They became internationally known over the space of a couple of months in 2008.

Fr Eugene O’Hagan said: “I still have the skid marks to prove it – it was quite a journey.”

They perform concerts throughout the year and every two years they travel to the US.

They are not the first Catholic clergy to accept honours.

Father Eugene O’Hagan said: “It is a recognition of that cross-community aspect to the world of music and something people have been able to tap into, so we are happy to accept the nomination.”

They contribute to a charity called Sightsavers which works internationally to prevent blindness.

Another Catholic priest, Father Stephen McBrearty, was made an MBE in recognition of his chaplaincy work inside prisons.

He said: “This award recognises and pays tribute to the extraordinary contribution of all chaplains from all Christian denominations and other faiths – the men and women who untiringly give their service to the prison parish family.

“Throughout the history of Northern Ireland Prison Service, chaplains have been appointed to spiritually and pastorally accompany those placed into their care and those they work alongside.

“In their ministry, chaplains bring an awareness of the need for prisoners to be reconciled and resettled into the community within which much pain and suffering has been caused by their actions.”