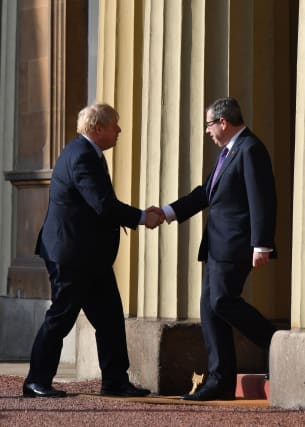 The Queen has made her private secretary Sir Edward Young a Knight Commander of the Royal Victorian Order (RVO).

In his role Sir Edward acts as the channel of communication between Downing Street, and Commonwealth nations where the monarch is head of state, and the Queen.

He has worked for the royal household for 15 years and has been in his present post since September 2017, succeeding Sir Christopher Geidt.

Sir Edward has served as assistant then deputy private secretary to the Queen having joined the royal household in 2004.

He previously worked for Granada as head of corporate communications and for Barclays, where he held a range of financial and executive roles.

Awards under the RVO are in the Queen’s gift and are bestowed independently of Downing Street to people who have served the monarch or the Royal Family in a personal way.

Also recognised is Professor Charles Mackworth-Young who from 2006 to 2018 was medical director and chairman of the medical committee at the private King Edward VII’s Hospital. He is made a Commander of the RVO.

The hospital is where the Royal Family have been treated for decades and the Duke of Edinburgh was recently discharged from the medical institution after spending four nights being treated for an undisclosed but pre-existing condition.

Natalie Barrows, assistant private secretary to the Duchess of Cambridge, has been made a member of the RVO as has Clara Loughran, senior programme co-ordinator for the Duke and Duchess of Sussex.

The Queen’s National Hunt racing adviser Sir William Oswald, who is already a Knight Commander of the RVO, has been made a Knight Grand Cross of the Order by the monarch.