McKillop made MBE in ‘important accolade for disabled sport’ 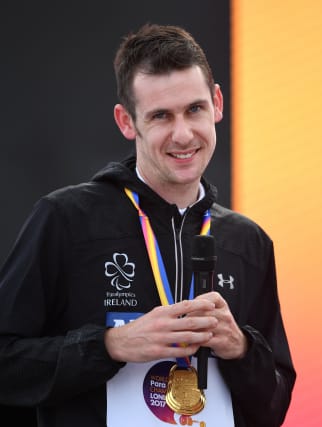 A Paralympic champion runner from Northern Ireland has been made an MBE, in an important recognition for disabled sport.

Michael McKillop, from Co Antrim, said he was enjoying a special feeling.

He said: “It is an amazing chance and a big accolade for all the hard work I put in trying to promote disabled sport and disability awareness.”

He is a middle distance runner from Belfast who has cerebral palsy.

He won gold at the Paralympics in Beijing, London and Rio.

Mr McKillop said the honour was about making people aware of what disabled sport was all about.

“We train six or seven days a week like elite athletes.

“To be recognised alongside able-bodied sports stars is very special.”

Among the other winners were Northern Ireland football’s former skipper Aaron Hughes. He starred during his country’s memorable Euro 2016 run in France.

Hughes, who when he retired in June had earned a then record 112 outfield international caps, has been made an MBE for services to football.

Having made his debut as an 18-year-old against Slovakia in March 1998 under Lawrie McMenemy, Hughes, from Cookstown, went on to captain his country 48 times.

“He demonstrated a remarkable consistency throughout his 22-year professional career.

“He was never red carded and is a true role model for any young player looking to be a full-time footballer.”

Alastair Hamilton, who announced his retirement as chief executive of Government jobs agency Invest NI earlier this year, was made a CBE.