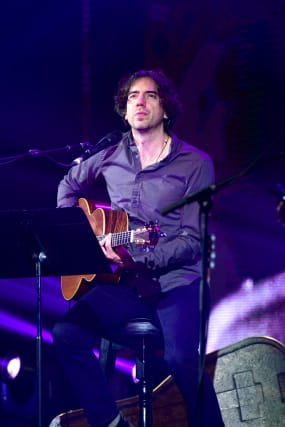 The 43-year-old singer has been made an OBE for services to music and charity in Northern Ireland.

His band’s 2006 hit single, Chasing Cars, became the most widely played song of the 21st century on radio.

He helped establish Belfast’s Oh Yeah Music Centre, which supports aspiring musicians in getting a foothold in the industry.

His Lightbody Foundation was established in 2019 to support charities in Northern Ireland dealing with issues like mental health, depression and youth engagement.

Close friend Davy Matchett, 44, said: “He does it because he is a good man.

“He does not have to but he sees the value in it.

“He loves Belfast, he loves Northern Ireland, he loves home, he loves people and he loves doing what he can to bring about positive change.”

The Oh Yeah Music Centre lies in the heart of Belfast’s revitalised Cathedral Quarter, a creative hub for the arts and music.

It teaches young musicians skills which help them make the breakthrough in London and elsewhere.

Snow Patrol regularly hold massive open air concerts in the band’s compact home town of Bangor in Co Down, with the bill last summer made up entirely of Northern Irish performers.

Mr Matchett said of Lightbody: “He just wants to use whatever he can to help.

“Snow Patrol had 10 years of making mistakes and things not going right, and he thinks if he can impact so that young people don’t have to make those mistakes and have the right people around them in terms of an environment where there are managers or lawyers, accountants and labels and studios, that if he can do something to make that happen, he just does it because he is a good man.”

Lightbody was born in Bangor in 1976 and attended Campbell College in Belfast.

It was there that he was first introduced to the work of Irish poet Seamus Heaney, an experience that inspired him to first write poetry, then songs.

John D’Arcy was founding chairman at Oh Yeah and is also a trustee of the Lightbody Foundation.

He said causes close to Lightbody’s heart include dementia care, of which he has close family experience.

The singer has supported a Belfast barber helping men with dementia.

Lenny the dementia-friendly barber takes his pop-up shop to care homes and unlocks people’s emotional memories by recreating the barbershop experience of their youth, including music from decades ago.

Mr D’Arcy said Lightbody is interested in the role of music in helping people with dementia.

“It is very life-enhancing for people … there is a very personal link there as well.

He added: “He has a real love of people here and the Oh Yeah Centre in the first instance but then the Lightbody Foundation is giving a wider span of activity to do.

“He is pushing us as trustees to find charities and it is really good to be working with somebody like that.”