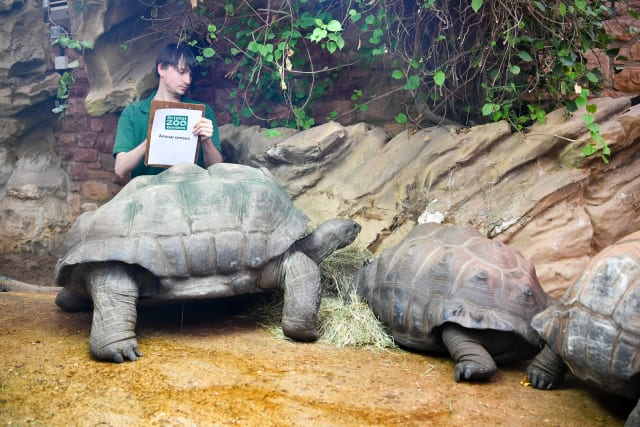 Keepers at Bristol Zoo are meticulously counting all 10,000 animals as part of its annual census.

Staff armed with clipboards, tablets and spreadsheets began checking the number of residents across the 12-acre site on Friday morning.

Every animal, from the smallest ant to the largest gorilla, will be counted to make sure their numbers tally with the zoo’s records.

The animal census is carried out before for the start of each new year and takes most of the day.

They include many endangered species for which the population in zoos is crucial to their survival.

Some animals are easier to count than others, including the rare golden poison arrow frog – of which the zoo has four.

These toxic amphibians are the most poisonous frogs in the world, with just one individual containing sufficient toxin in its skin to kill at least 20 adult humans.

Other species prove more of a challenge to count, due to their size and quantity, such as the zoo’s colony of leafcutter ants.

Senior invertebrate keeper Carmen Solan said: “Our leafcutter ants may be tiny but they are absolutely fascinating.

“Each ant has its own place in the colony – the queen rules the roost and can produce up to 150 million offspring in her lifetime.

“Among the workers, there are gardeners tending to the fungus, soldiers defending the nest, and foragers hustling to find, cut and transport the best leaves.

“Each ant can carry a load more than 20 times heavier than itself – the equivalent of a human carrying five adult male grizzly bears.”

Friday’s count also includes the zoo’s flock of black-cheeked lovebirds, which are some of the noisiest creatures at the attraction.

2019 was one of the zoo’s most successful breeding years for the dazzling birds, with the arrival of 30 chicks making its 95-strong flock one of the biggest in Europe.

John Partridge, senior curator of animals, said: “Counting the animals is an important task because it acts as an audit to check that our records are accurate.

“We have precise information on individual animals and groups, which we share with colleagues around the world to help care for the animals.”

There, too, keepers are spending the day counting everything from European brown bears and tiny dik-diks to the flock of black-headed village weaver birds.