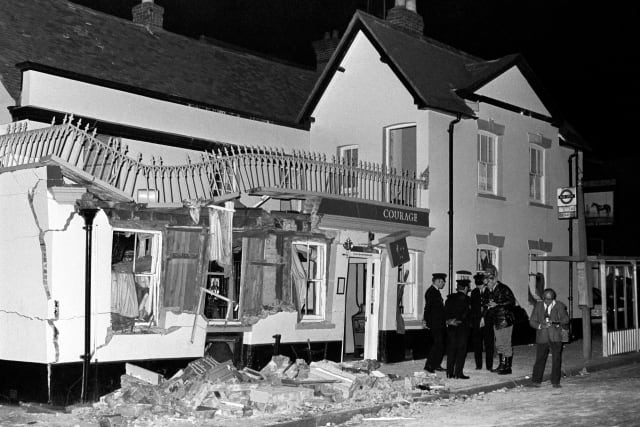 Ireland’s foreign minister privately told the British Home Secretary that the controversy surrounding the Birmingham Six and Guildford Four cases was “seriously affecting” the relationship between the two nations, state papers have revealed.

Minister for foreign affairs Gerard Collins raised the issue with Douglas Hurd during a meeting in 1989, months before the Guildford Four were released from prison.

Mr Collins said it was “unhelpful to our common effort to put the subversives out of business”, the previously secret Irish government documents, released under the 30-year rule, reveal.

He also said that Ireland was under constant pressure to adopt a more aggressive approach over the cases.

The Birmingham Six – Hugh Callaghan, Patrick Joe Hill, Gerard Hunter, Richard McIlkenny, William Power and John Walker – were each sentenced to life imprisonment in 1974 following their false convictions for the 1974 Birmingham pub bombings, in which 21 people were killed.

The Guildford Four – Paul Hill, Gerry Conlon, Paddy Armstrong and Carole Richardson – were sentenced to life imprisonment in 1975 after they were falsely convicted of the IRA bombing of pubs in Surrey that left five dead.

The government papers also reveal that in a meeting with former Fine Gael TD Peter Barry, Birmingham Six’s Mr Hill, known as Paddy Joe, accused the Irish embassy and Irish government of not showing any interest in their case until after 1985.

He told the Fine Gael minister he wanted a statement from the taoiseach saying they were innocent.

In a letter to then-taoiseach Charles Haughey, Mr Hill pleaded with him to take their case to the European Court of Human Rights under Article 28 of the convention, saying there is “absolutely nothing preventing the Irish government from doing this”.

In the letter, dated July 25 1989, Mr Hill wrote: “I would like to take this opportunity in thanking the Irish Government in asking for an investigation into the West Midlands Police. This is the first positive thing you have done for us, the Birmingham Six.”

His letter was sent months after Mr McIlkenny asked Mr Haughey to take the case of the Birmingham Six to the European Court of Human Rights.

In a written reply from the taoiseach’s office, his private secretary told Mr McIlkenny that the Irish government could not support an individual’s petition against another State.

He went on to assure the prisoner that “all opportunities will be availed of” to highlight Ireland’s concern of their case.

The private secretary also told Mr Hill that the Irish government had urged the British authorities to undertake a “complete review” of their case.

Documents show that the relatives of the Guildford Four, who were travelling to England for the appeal hearing, were concerned they might be harassed by police.

Former TD Pat McCartan suggested that Ryanair or Aer Lingus could be approached behind the scenes for assistance, with officials supporting the idea.

After the Guildford Four were released in October 1989, their lawyer Gareth Peirce told an Irish government official she was “incredibly angry” it had taken 15 years to have their convictions quashed.

Speaking about the frustration of not being able to argue their case in the Court of Appeal, Ms Peirce claimed police had deliberately suppressed alibi evidence for Mr Conlon.

In a private note, the Irish official said: “Ms Peirce thought that if there was something of which she was not aware, it must have been ‘excruciatingly embarrassing’ evidence that they did not want to come out in open court.

“She alleged that the police had deliberately suppressed alibi evidence for Conlon. She said she was disappointed that after all these years she would not have the opportunity to make the prosecution ‘sweat blood’ at the January appeal, which she had been given to understand would be hotly contested.”

After their release, the Guildford Four thanked the Irish government for their help but asked for their support in the campaign to have the Birmingham Six also released from prison.