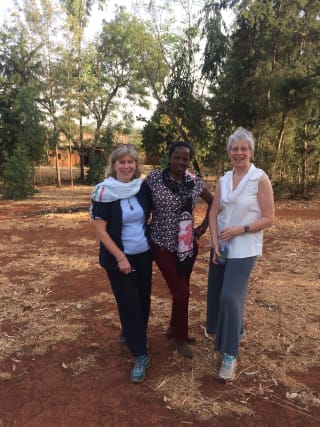 A grandmother who co-founded a charity in Ethiopia with her cousin “burst into tears” after opening the letter which said they would both be made MBEs.

Jo Middlemiss and Maureen Burnett started the Ethiopia Medical Project (EMP) nine years ago after the latter came across a tiny clinic in Buccama while volunteering in the country.

Staff had struggled to cope without enough food or medical supplies, but the grandmothers raised money for basic materials such as mattresses – and now hope to raise £25,000 annually through charity events and donations.

Ms Middlemiss, 71, from Kinross, said: “Opening the letter took me by surprise, it was a shock really and I just burst into tears.

“I was jumping up and down and wanted to tell everyone, but you have to keep it a secret until it’s announced, so I’ve been bursting to tell my family all Christmas.

“Maureen and I feel we have learned and gained so much more than we have given.

“We feel like we are going back to family when we go to Ethiopia and we’re not just two old grannies – the women there don’t care how old we are or how grey our hair is.

“They know we believe in them and that we will do everything we can to continue to support them.

“My wish for the new year is that through this award some great benefactor or organisation will discover the charity and will want to come on board and support us to help more people.”

Since their involvement with the clinic, it has expanded to become the Buccama Health Centre with two wards, a laboratory and 22 members of staff including five qualified nurses.

Ms Burnett, 74, from Glasgow, said: “One woman’s story will stay with me forever, she had one of the worst cases of uterine prolapse imaginable.

“When it happened she didn’t know what was wrong and was so ashamed that she didn’t leave her bed for four years, which wasted the muscles in her legs and she could no longer walk.

“The staff gave her the best care possible and after her operation and lots of physio she is now back up walking and dancing.”

Each February the pair travel to live and work at the clinic – paying their own expenses – to see what is needed for the rest of the year.

The centre has also recently expanded to treat those with the endemic foot disease Podoconiosi.

Ms Middlemiss added: “Women can gain back their self-respect, they’re no longer banished from their homes and can go back to their children and families and contribute to the community.

“The impact stretches way beyond the individual women helped.

“One of the many highlights has been witnessing attitudes around the stigma evolve as more and more women speak out and those who need to, get support.”