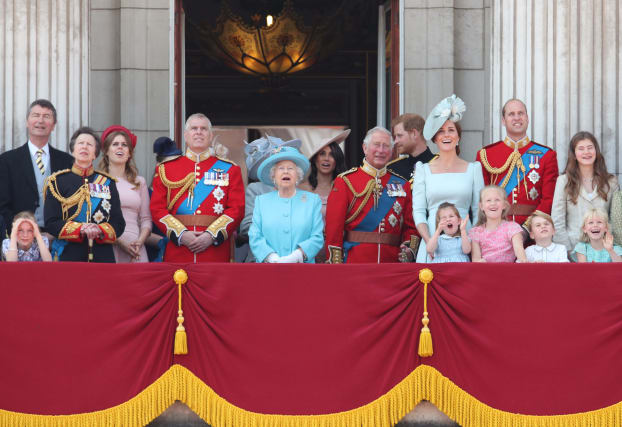 The royals’ decade has been marked with a feast of family celebration, from weddings to an abundance of royal babies.

Two new families – the Cambridges and the Sussexes – came to the forefront of royal life, along with two new high-profile women, the Duchess of Cambridge and the Duchess of Sussex.

William presented Kate, dubbed “Waity Katy” during their long courtship, with Diana, Princess of Wales’s sapphire ring and popped the question as they holidayed in Kenya in 2010.

In April 2011, millions tuned in to watch their royal wedding in London’s Westminster Abbey.

Kate, in a lace Sarah Burton for Alexander McQueen gown, became an HRH and a future queen after saying her vows.

The new Duke and Duchess of Cambridge kissed on the balcony of Buckingham Palace, as the crowds turned out in celebration.

But royal fans had to wait another seven years for the next high-profile nuptials.

Prince Harry and American actress Meghan Markle announced their engagement in 2017 following a whirlwind 16-month romance after meeting on a blind date.

The pair, who became the Duke and Duchess of Sussex, tied the knot in a romantic, star-studded ceremony in St George’s Chapel at Windsor Castle in May 2018, with Meghan dressed in a simple, boat-necked pure white wedding gown by Clare Waight Keller at Givenchy.

Eugenie’s sister Princess Beatrice got engaged and is due to wed in 2020.

It was also time for a new generation of Windsors to put in an appearance.

The Queen and Philip’s first great-grandchild, Savannah Phillips, was born to Peter Phillips and his wife Autumn in 2010, followed by her sister Isla in 2012.

At the end of 2012, it was announced Kate was pregnant and being treated in hospital for severe morning sickness.

Future king Prince George of Cambridge arrived among much media hype in July 2013, and made his public debut outside the Lindo Wing of St Mary’s Hospital in London.

She slept soundly as she was introduced to the world dressed in a cream knitted bonnet.

The duke joked he had “thrice the worry” as they took the prince home to Kensington Palace.

Meanwhile Zara Tindall welcomed Mia in 2014, and another daughter, Lena, in 2018.

At the end of the decade, Harry’s dream of parenthood finally came true as he and Meghan celebrated the arrival of their son Archie Mountbatten-Windsor in May 2019.

Announcing his birth, the duke said: “This little thing is absolutely to die for, so I’m just over the moon.”

The royal births were followed by royal christenings, and then nursery and school starts for George and Charlotte, and a start to royal duties, with appearances on the balcony for Trooping the Colour.