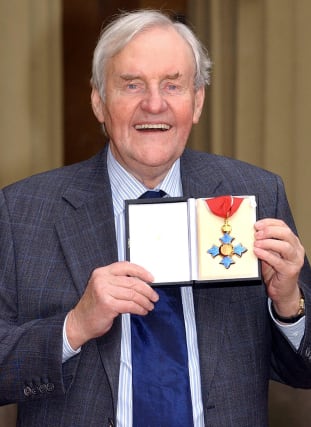 The daughter of The Good Life actor Richard Briers has opened up about grieving for her father.

Lucy Briers, 52, says she still struggles to deal with the loss of stage and screen star Briers, who died in February 2013 aged 79 after suffering from lung disease.

Ms Briers, also an actor, who appeared as Mary Bennet in the BBC adaptation of Pride And Prejudice, told how she was “profoundly traumatised” after witnessing paramedics trying unsuccessfully to resuscitate her father on the floor of his hallway.

She told Marie Curie’s Talkabout website: “The first punches of grief hit me as I tried to get to sleep the night of dad’s death.

“I just couldn’t absorb the fact I would never see him again. For me, that has been a huge obstacle, and six and a half years on I continue to struggle with it.

“I still get the urge to give him a call and have a chat. There can be a few brief moments when I think I can.

“And then a wave of such sadness when I remember that, of course, I can’t.”

Ms Briers keeps what she describes as her “dad cupboard” of DVDs spanning her father’s career to treasure his memory.

“So, when I want to remember his voice, his physicality, his laugh, I open that cupboard and choose a programme to suit my mood.

“I used to find it almost unbearable to watch him or hear his voice on the radio, but as the years have progressed it has brought me enormous comfort.”

The late actor’s family have also been heartened by hundreds of letters from fans and people he helped during his career.

“My mother received around 750 letters in the first week after dad’s death, with many stories – how dad helped a charity someone had started, or done a narration in a short film for free, or sent a cheque to help someone through drama school,” Ms Briers said.

“Most of these stories we knew nothing about, and it was wonderful to have so much love and gratitude coming into mum’s house.

“When your dad’s so well-loved and so well-remembered, it makes you feel as if his memory is being honoured.”

Ms Briers urges anyone grieving to be “kind to yourself”, and “do things at your own pace”.

“There are no rights or wrongs. We took a long time to put dad’s ashes in three different places.

“My mother still hasn’t sorted through his wardrobe.

“She now has Alzheimer’s, so I’m not going to push anything she doesn’t want to. Having his clothes there may bring her comfort.

“Remembering the person you’ve lost, with friends and family, is also a great therapy.

“Just sharing stories and memories. This is hard at first, but gets easier and keeps them alive in your mind.”

Government sets out plans for a new points-based immigration system