D-Day veteran dedicates MBE to the 22,000 who did not come home 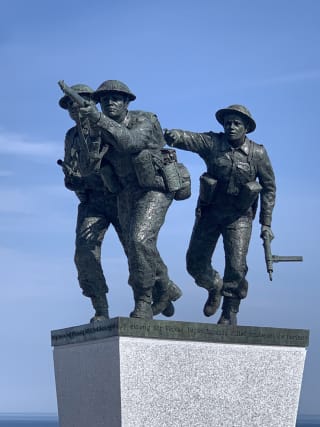 A D-Day veteran who has raised more than £10,000 towards the cost of building a national memorial honouring his fallen comrades is to be made an MBE.

Harry Billinge, 94, said he would accept the honour not for himself but for the 22,442 service personnel who were killed on D-Day and during the battle for Normandy.

In June Mr Billinge travelled from his home in St Austell, Cornwall, to Normandy to mark the 75th anniversary of the D-Day landings.

He went to see the unveiling of the first foundation stones to remember all those who served in the British forces during the conflict.

Speaking from his home, Mr Billinge, who also holds France’s highest award, the Legion d’Honneur, said: “I’m 94 and I only did what I did for the boys. I’m no brave man and I’m just an ordinary sapper, Royal Engineer Commando.

“I did my job and I didn’t want any glory. There’s no glory in war.

“Nobody should have got off the beaches at D-Day and I was lucky. I’ll never forget any of the blokes I was with – 22,442 were killed and it’s very difficult for me to talk about that.”

Discussing the MBE, Mr Billinge said: “It’s overwhelmed me to be honest. I’m 94 and it’s a bit late in life to be recognised.

“I am very grateful for any kindness bestowed upon me.

“I am choked beyond measure to think I have got an MBE. I don’t deserve it.

“What a waste of life, terrible.”

As well as his work to remember the fallen on D-Day, Mr Billinge has for many years undertaken charity work in Cornwall.

He was chairman of the Cornwall branch of the Normandy Veterans’ Association, president of the Royal Engineers Association and collected for the Royal British Legion Poppy Appeal for 64 years.

According to the Normandy Memorial Trust, on D-Day and the subsequent battle for Normandy, 22,442 servicemen and women died under British command.