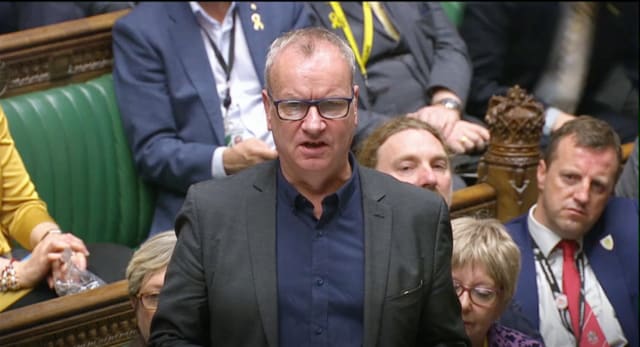 Winning a second referendum on Scottish independence is “all about gentle persuasion”, SNP MP Pete Wishart has said.

The Perth and North Perthshire MP, who increased his majority by more than 7,000 at this month’s election, said work is required by the party to retain the support which saw it increase its Commons seats to 47.

In a blog post on his website, Mr Wishart said any talk of “illegal referendums” and “dissolving the union” would see first-time SNP voters move away from the party and back to their unionist rivals.

A motion put forward by Inverclyde Council leader Christopher McAleny and MP Angus MacNeil at the SNP conference in October pushed for a “Plan B” – stating that a win for the SNP at the next Westminster or Holyrood election would give the Scottish Government a mandate to open talks on exiting the UK.

Following the SNP’s success on December 12, First Minister Nicola Sturgeon requested the powers from Westminster for another plebiscite – something Prime Minister Boris Johnson has maintained his opposition to.

Mr Wishart claimed persuasion is required to win people over to the case for an independent Scotland, and the party must fight the urge to hold a referendum quickly – which he said would play into the hands of the UK Government.

He wrote: “Talk of illegal referendums, UDIs (unilateral declaration of independence), dissolving unions and trying to game or trick our way to independence will send all these aspiring recruits running back into the arms of the union case.

“The Tories are hoping beyond hope that we now blow it through impatience and alienate this new support that is coming our way.

“Instead it should now be all about gentle persuasion, about convincing and understanding.”

He added that a big win for the independence cause in a future referendum would “put it beyond all reasonable doubt and question”.

He said: “There is a real sense that we are in the end game of Scotland’s participation in their union.

“It really now is only ours to lose. We now have the opportunity not just to win it but to win it well and put it beyond all reasonable doubt and question.”

Meanwhile, independence-supporting group Forward As One has set up a crowd-funder to take the UK Government to court if Ms Sturgeon’s request for a Section 30 order is officially rejected.

Writing on the campaign website, Forward As One said: “The aim is simple, to defend the inalienable right of the Scottish people to engage in the fundamental right to vote on the constitutional question without reliance on any politician to ensure that those rights are enabled.”