A man who was shot dead in front of his family near their Battersea home on Christmas Eve has been named as Swedish national Flamur Beqiri.

The 36-year-old was found with gunshot injuries shortly after 9pm on Tuesday.

Metropolitan Police officers were called to the house on Battersea Church Road, in south-west London, after reports of gunshots and Mr Beqiri was pronounced dead at the scene.

No arrests have been made and a post-mortem will be held in due course.

Detective Chief Inspector Jamie Stevenson said: "Our investigation is in the very early stages and we are still working to establish what the motive could be that has led to a man losing his life in such a horrific way, on Christmas Eve, in front of his family.

"They have been devastated by this horrible event and are being supported by specialist officers.

"We know that the victim was returning home with his wife and young child following an evening out, when he was shot just yards from his home.

"The assailant then fled on foot in the direction of Battersea Bridge Road."

Neighbours living near the scene of the shooting described hearing multiple gunshots followed by a woman screaming "desperately" for help. 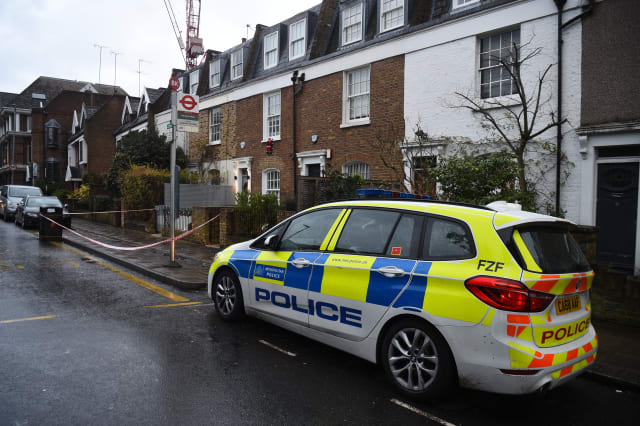 Vittoria Amati, 60, said she heard between "eight to 10" gunshots fired in quick succession.

Mrs Amati told the PA news agency: "I then heard the screams of the wife. I came out and realised it was one of my neighbours.

"He was lying in front of his doorway in a pool of blood. He was still alive. We were really hoping he would make it.

"You have no idea how desperate she (his wife) sounded."

Last year, there were 141 police-recorded homicides in the capital, according to Home Office statistics.