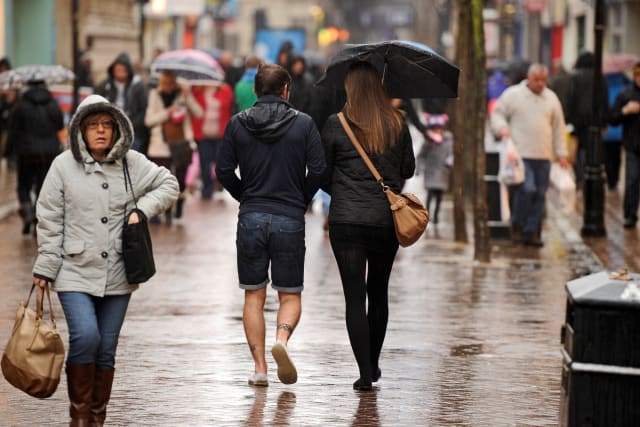 The Met Office has warned that shoppers will have to battle wet and windy conditions if they want to take advantage of Boxing Day sales.

A huge deluge of rain is expected to sweep across the UK on Thursday, with some parts of the south west of England likely to experience up to 30mm (1.2ins) of rainfall.

Other regions could see as much as 20mm (0.8ins) as the weather front travels across the country.

Coastal areas in the south west are also forecast to be hit by winds of up to 50mph.

The conditions are set to put a dampener on what was a mostly pleasant Christmas Day for the UK with Met Office forecaster Alex Burkill predicting that “pretty much everywhere” will see some level of wet weather.

“For most places there is going to be a lot of cloud and some rain around too,” Mr Burkill said.

“The heaviest will be in south-west England and Wales.

“Because of the amount of rain we have seen this month there could also be some localised flooding.”

There is some good news for London shoppers however, with the skies expected to clear by the afternoon as temperatures reach 12C in the South and 5C further north.

Looking ahead, the rain is expected to persist until Saturday in the north west of England while sunshine should return for the south east in time for the weekend.