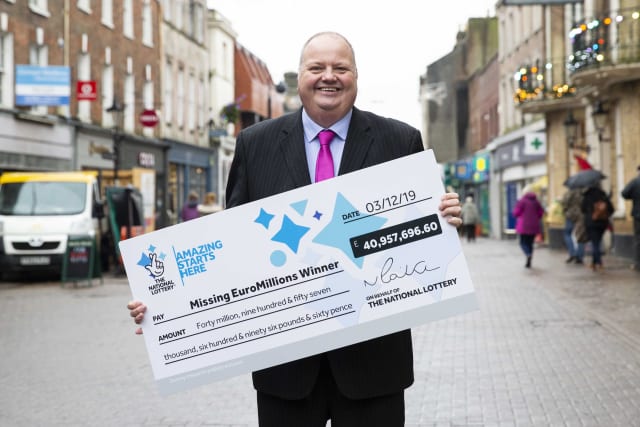 The hunt is continuing for the winner of a EuroMillions jackpot of almost £41 million as a deadline to claim the prize approaches.

National Lottery players in Dorset are being urged to double-check their favourite numbers ahead of the 30-day deadline next week for reporting a lost, destroyed or stolen ticket for the big prize.

The ticket-holder matched all five main numbers and the two Lucky Star numbers in the EuroMillions draw on December 3. The winning numbers were 18, 31, 32, 38 and 48, with Lucky Stars 04 and 12.

National Lottery operator Camelot has disclosed the winning ticket was bought in Dorset but will not reveal any further information in case the winner wishes to remain anonymous.

Under its licence Camelot has the discretion to pay prizes in respect of lost, destroyed or stolen tickets only if the player has submitted a claim in writing by 5pm on January 2.

Camelot will then determine whether the claim is valid, and would then pay the prize 180 days after the draw date.

However, there is a second deadline for anyone with the winning ticket still in their possession – they have until midnight on Sunday 31 May, 2020 to make their claim.

Andy Carter, senior winners’ adviser at The National Lottery, said: “It’s important that any player who is not in possession of their ticket for whatever reason but who thinks they have a genuine claim to the prize notifies us in writing by 5pm on January at the latest.

“We’re doing all we can to reunite the ticket-holder with this amazing £40 million win – one of the biggest unclaimed prizes ever.

“The festive period is such a busy time for everyone and in all the excitement it’s possible that the winning ticket might have been somehow misplaced.

“What a start to the new year it would be for the lucky ticket-holder if they were to check their tickets and claim their prize.

“We have our fingers crossed that we’ll soon be welcoming our seventh UK EuroMillions jackpot winner of 2019.”

If no-one comes forward with the winning ticket before the May 31 deadline, the prize money, plus all the interest it has generated, will go to help National Lottery-funded projects across the UK.