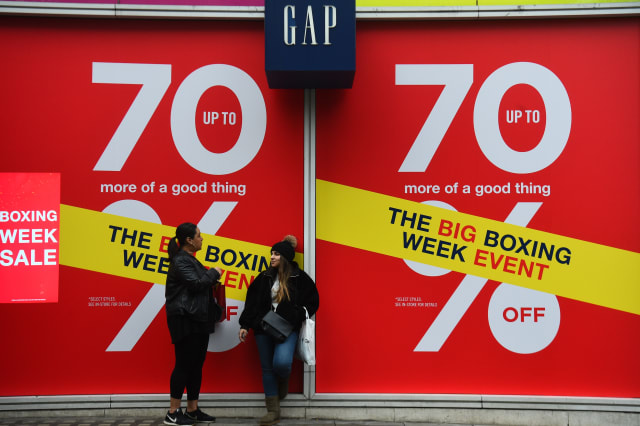 Bad weather has deterred some Boxing Day bargain hunters, with footfall reportedly down 10% in high streets and shopping centres.

Retail experts Springboard said footfall in the period up to midday on Boxing Day had seen the largest decline of any year since it began publishing data 10 years ago, with a drop of 10.6%.

Diane Wehrle, insights director at Springboard, said figures might improve slightly through the day, particularly if the rain stops, but they are still likely to be substantially down on last year.

She said: "This result reflects a number of underlying structural changes in terms of how consumers shop with more going online, the increased spending around Black Friday, the growing demand for hospitality and experience and the fact that the number of blended families means that many consumers are still celebrating Christmas on Boxing Day with their family.

"In combination, these changes mean that Boxing Day is indisputably a less important trading day than it once was."

Among the bargain-hunters who did brave the rain, shoppers on London's Oxford Street huddled under umbrellas as they waited for stores to open at 9am.

Bosses at department store Selfridges said by 2pm it was trading on a par with last year's Boxing Day – which was its biggest ever trading day.

Shoppers in Greater Manchester began queuing outside the Trafford Centre Selfridges store at 4.30am, while crowds began to gather outside the London branch at 6am.

In Liverpool, more than 150 people were outside the Next store before the doors opened at 6am and queues also formed outside Marks and Spencer, cosmetic store Lush and fashion boutique Cricket.

But Britons are expected to spend £200 million less in the post-Christmas sales this year as environmental concerns drive down buying.

Ms Gregory said: "We come every year, it's like a tradition, but we have been buying less as years go by because we're trying not to consume as much for environmental reasons.

"My children used to get piles of stuff for Christmas but now we try and limit it to three or four presents."

Four in 10 UK adults are expected to make the most of sales from Boxing Day, spending an average of £186 each and a total of £3.7 billion, according to Barclaycard.

But due to concerns about the environment, 62% intend to make fewer purchases, rising to 68% among women.

Almost seven in 10 consumers (67%) also plan to spend less on "fast fashion" because of the potential environmental impact of its production.

Rob Cameron, chief executive of Barclaycard Payments, said: "Our data for Black Friday and Cyber Monday revealed a huge jump in transaction volumes this year, so it's not surprising that consumers expect to have less money to spend after Christmas, so retailers need to take that into account.

"What's more, our research shows that shoppers are increasingly thinking about how their purchases impact the environment. Forward-thinking retailers should be making a conscious effort to demonstrate their commitment to sustainability in order to boost their appeal – and their revenue."