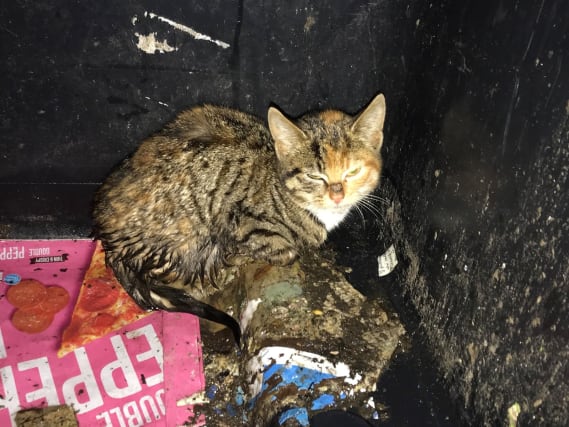 A kitten has been named Miracle after RSPCA officers rescued her from an industrial bin in Durham just before Christmas.

The 10-week-old kitten was heard meowing by a member of the public the day before she was found on Friday December 20.

Shane Lynn, an RSPCA animal collection officer, said: “It seems incredibly unlikely that this kitten got into the bin on her own.

“It was one of those big industrial bins and the lid was down. There was nothing else in it apart from her so whoever closed the lid couldn’t have missed her being inside.

“I had to use a ladder to climb into the bin and get her out so there was no way she was going to be able to do so herself.”

The kitten was taken to be checked over by local vets and is now settling in with an RSPCA foster carer.

Mr Lynn said: “She was so lucky. She could have died in there. It was a Christmas miracle that she was heard… we’ve decided that should be her name – Miracle.

“She’ll stay in foster care over the Christmas and new year period and the hub will look for a new home for her after that.”