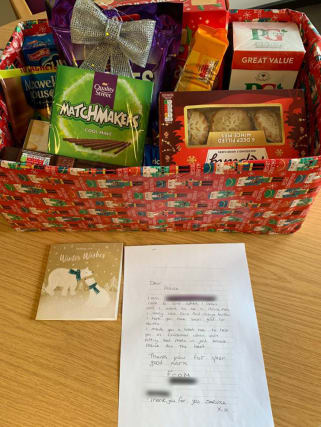 A six-year-old boy has melted hearts by saving up his pocket money to buy a team of police officers sweet treats to tide them over on their Christmas shift.

Officers with Thames Valley Police in Reading shared the small boy’s act of kindness on Twitter.

The boy delivered a box of treats complete with a card and a letter to the officers, support staff and volunteers who are working over the festive period.

The Christmas-paper wrapped box included a pack of mince pies, a bag of coffee and boxes of tea bags, cup-a-soups, chocolate and biscuits.

The gift included a large silver bow affixed to the top of a bag of chocolate.

As well as the present and card, the anonymous six-year-old wrote the officers a letter about his own dreams of joining the force.

The boy wrote: “Dear Police, I am six and when I grow up I want to be a policeman.

“I made you a treat box to help you on Christmas when you’re putting bad people in jail because the police are the best.

“Thank you for your good work.”

Thames Valley neighbourhood inspector Penny Jones, based in Reading, was one of the officers who received the gift.

“A lovely six-year-old boy has been saving his pocket money and bought this box to the police station for staff working on Christmas. Thank you from all of us,” she said.