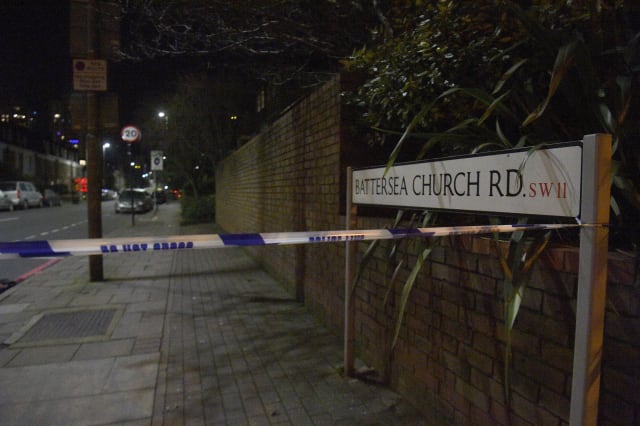 Neighbours living near the scene of a fatal Christmas Eve shooting outside a luxury £1.5m London townhouse described hearing multiple gunshots followed by a woman screaming "desperately" for help.

Police were called to a property on Battersea Church Road in Battersea, south-west London, at about 9pm on December 24, to reports of shots being fired.

Officers from the Metropolitan Police and London Ambulance Service found a man, believed to be in his 30s, suffering from gunshot wounds.

He was pronounced dead at the scene, Scotland Yard said.

Vittoria Amati, 60, who lives nearby, said she heard between "eight to 10" gunshots fired in quick succession.

Mrs Amati told the PA news agency: "I was watching television when I heard this round of shots. One after the other very quickly. There was between eight to 10 of them.

"I knew it was a shooting and I didn't want to come out because I was scared it might not be safe.

"I then heard the screams of the wife. I came out and realised it was one of my neighbours. He was lying in front of his doorway in a pool of blood.

"He was still alive. We were really hoping he would make it.

"You have no idea how desperate she [his wife] sounded."

Mrs Amati said a young woman who identified herself as a nurse helped the victim and applied pressure to his wounds as he was bleeding "heavily".

She said the man was moved from his doorway and initially into the back of an ambulance by paramedics.

However, they took him out again to begin treating him on the road, Mrs Amati said.

A 24-year-old man, who also lives nearby, said he initially thought the gunshots were fireworks.

He told PA: "We opened the window and we heard a woman saying her husband had been shot. We heard about five shots.

"We thought it was fireworks, but when we heard the lady panic, we knew it was more serious.

"From what I saw, he was shot in the neck and I saw a bullet wound to his stomach.

"One of the girls here came out and tried to put pressure on the wounds, then police came and took over."

The man, who moved in to the street a month ago from South Africa and did not wish to be named, said at one point there were about 10 people gathered outside trying to call 999.

A police cordon remained outside the house on Christmas night. A police car was also parked nearby.

Scotland Yard said it had launched a murder investigation.

A murder investigation is underway after a man in his 30s died following a shooting in #Battersea#Wandsworthhttps://t.co/7Es4uxHZYo

Last year there were 141 police-recorded homicides in the capital, according to Home Office statistics.

No arrests have been made and homicide detectives are investigating, the Met said.