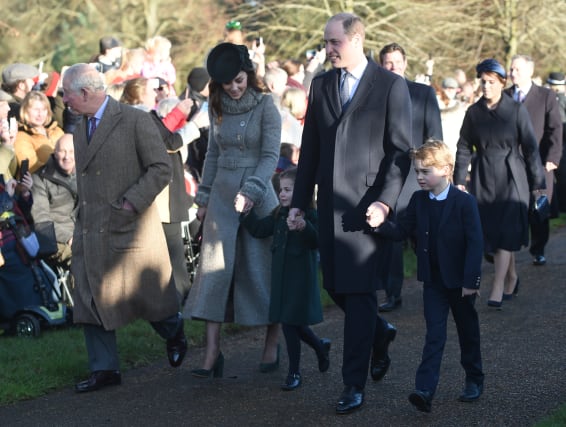 Prince George and Princess Charlotte have joined the Queen at the royal family's traditional Christmas Day church service on her Sandringham estate for the first time.

George, six, and four-year-old Charlotte walked the short distance from Sandringham House to St Mary Magdalene Church hand in hand with their parents, the Duke and Duchess of Cambridge.

The Prince of Wales walked alongside them.

The 93-year-old Queen, wearing a red coat and hat, arrived at the church in a maroon Bentley with the Duchess of Cornwall.

The Duke of Edinburgh, 98, who was discharged from hospital on Christmas Eve, was at Sandringham but did not attend church.

He had spent four nights at the King Edward VII Hospital in London to receive treatment for a "pre-existing condition".

Philip, who retired from public duties in 2017, did not attend last year's church service either despite being in good health at the time.

The Duke of York, who has had a tumultuous end to the year after his disastrous appearance on the BBC's Newsnight programme, walked side by side with Charles to a service at 9am but did not attend the 11am service.

Andrew's attempt to explain his relationship with convicted sex offender Jeffrey Epstein backfired and he was heavily criticised for showing a lack of empathy towards Epstein's victims and remorse over his friendship with the disgraced financier.

The Duke and Duchess of Sussex were also absent this year, instead opting to spend seven-month-old Archie's first Christmas with the Duchess's mother, Doria Ragland, in Canada.