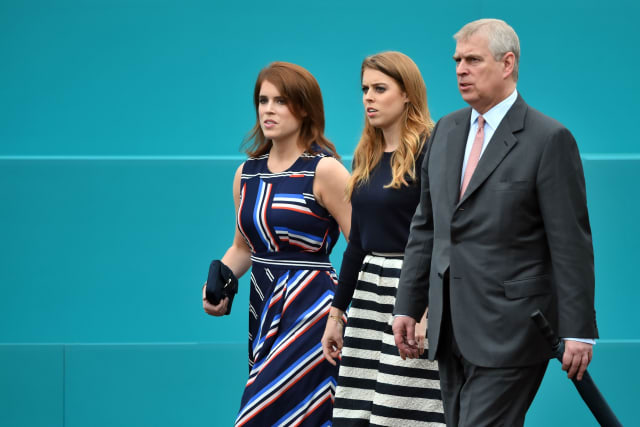 The Duchess of York has praised her "amazing" daughters Beatrice and Eugenie for their strength through the recent sex allegations surrounding their father the Duke of York.

Speaking at a charity event near London's Heathrow airport on Saturday night, Sarah Ferguson said: "[The] girls are the most precious blood in my veins. Recently... they are so strong and so steadfast because I believe we shine by helping others.

"The girls are there, they're humble and they keep going on and on.

"And it's like Rudyard Kipling wrote, if you can keep your head when all men doubt you. And my girls are amazing."

The comments from Andrew's ex-wife come in the aftermath of a "car crash" interview with Newsnight which led to the duke withdrawing from public life.

In the interview with BBC presenter Emily Maitlis, the duke denied allegations that he had sex with a woman who claims she was trafficked by convicted sex offender Jeffrey Epstein.

Addressing the claim by Virginia Giuffre, who alleged she was taken to London and introduced to the duke in 2001, Andrew insisted: "I can absolutely categorically tell you it never happened. I have no recollection of ever meeting this lady, none whatsoever."

Having kept a low profile since stepping down from public duties, the duke was recently spotted driving to the royal family's traditional pre-Christmas lunch at Buckingham Palace, which was also attended by Beatrice and Eugenie.

Beatrice is due to marry her property tycoon fiance Edoardo Mapelli Mozzi next year.

It is not known whether she will opt for a high-profile occasion like her sister Eugenie, who married wine merchant Jack Brooksbank in October.