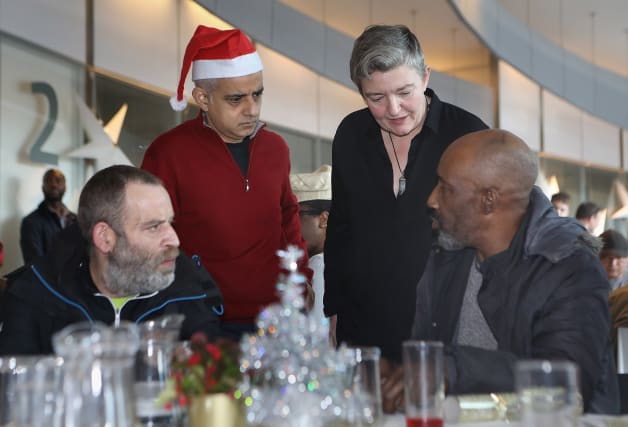 Sadiq Khan has hailed Christmas Eve as his “best day” as Mayor of London, after inviting 100 homeless people to City Hall.

The guests were given a three-course meal, hair cuts and an appointment with an optician, while their dogs were given free health checks.

They were welcomed to the headquarters of the Greater London Authority by singers from the London International Gospel Choir before being invited to take part in karaoke and other activities.

Mr Khan told the assembled visitors that “this is your City Hall”, adding: “I will be honest with you, I’ve now been the mayor for almost four years, coming to work every day.

“I’ve got to tell you this – this has been the best day of me being the mayor because you guys are here in City Hall.”

Mr Khan then donned a Santa hat and served meals to the visitors.

A report published earlier this month by housing charity Shelter found that London is the worst region in the UK for homelessness, with one in 52 people in the capital having nowhere to live, or an estimated total of almost 170,000.

Mr Khan said that rises in homelessness are “both heartbreaking and shameful”.

He added: “I don’t pretend that this one day is going to end rough sleeping or end homelessness.

“What I can do is try and give those who are our guests today a really special experience.”

Claire, a 50-year-old homeless visitor to City Hall, who did not want to give her surname, said the event had been “brilliant”.

She added: “For some people, Christmas isn’t always a happy time.

“So to go somewhere like this that you’ve never been, I think it’s really good.”