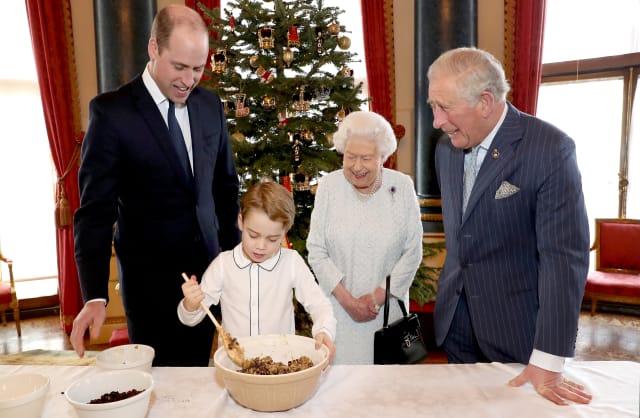 In the touching scenes, the Queen, the legion’s patron, and Prince of Wales watch as the Duke of Cambridge helps his son mix the festive treat.

The duke adds what appears to be fruits to the mixing bowl as his son embraces his job of making sure all the ingredients are well blended.

After prompting from his father, George repeatedly stabs at the thick pudding mixture with a wooden spoon, making his grandfather Charles laugh.

Charles and William are also featured trying their hand at Christmas pudding making and the duke is seen holding his son’s hand at the Buckingham Palace event staged earlier this month.

The puddings were mixed for the Royal British Legion’s Together at Christmas initiative, which aims to provide extra support to the Armed Forces community at annual festive “get-togethers” across the charity’s network, both at home and abroad.

From 2020, the annual events will be hosted at high street locations, care homes, membership branches and other outreach locations.

The royal family stirred four puddings together – which traditionally brings good luck – and each placed commemorative sixpences into the mixture, ready to be found by those attending the gatherings next year.

These special puddings will form part of 99 distributed across the legion’s network in time for the Christmas 2020 get-togethers, marking the charity’s ninety-ninth year.

Charles Byrne, the Royal British Legion’s director general, said: “The legion is not only here for older veterans, but all ages of the Armed Forces community.

“As the Monarch and next three generations, Her Majesty and Their Royal Highnesses represent a cross-section of those supported by the legion, from the children of service personnel, to Second World War veterans.

“Christmas can be a time when people’s troubles and worries are exacerbated by the financial pressures of the season or feelings of loneliness and isolation.

“The extra support the legion can give, and the camaraderie of our get-togethers can make a big difference to our community’s well-being.”