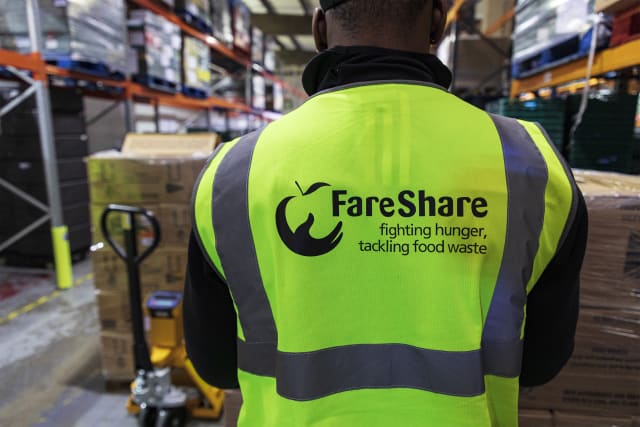 The Ministry of Defence has donated 14,000 unused ration packs to food waste charity FareShare in time for Christmas.

Thousands of Operational Ration Packs (ORP) have been delivered to the FareShare headquarters in Deptford to be sorted and distributed to charities in London providing support over the festive period.

The food packets do not need refrigeration and include ingredients for breakfasts, lunches and dinners such as porridge, sausages, pasta and baked beans.

Some ration packs also include complete meals such as chicken tikka masala and chilli con carne as well as treats including boiled sweets and cookies.

FareShare will distribute the packages to charities including those running street outreach programmes for the homeless and for those in temporary B&B accommodation with limited cooking facilities.

Figures published by the Government last week showed more than 68,000 households in England were assessed as homeless or facing homelessness during a three-month period this year – an increase of more than 11% compared with the same period last year.

FareShare works with 11,000 other charities and groups to save surplus good quality food from going to landfill and saves charitable groups an average of £7,900 per year.

The MoD has worked with FareShare for nearly a year.

Defence minister Johnny Mercer said: “FareShare does an excellent job of getting proper nutrition to those who need it most, distributing food to thousands of charities around the country. I am proud that our ration pack donation supports their goals whilst reducing unnecessary food waste.”

The donated surplus rations are typically used for group meals in field kitchens and around two million ration packs are used by the armed forces annually.

FareShare chief executive Lindsay Boswell said: “We’re delighted to have partnered with MoD to help them get their surplus food and get it to good causes. The ration packs we received last week will be sent to charities across London.

“Because these packs don’t need refrigeration they are ideal for winter night shelters where volunteers need to make food quickly, or to offer out to families in temporary accommodation who might only have access to a kettle or a hob at Christmas time.”