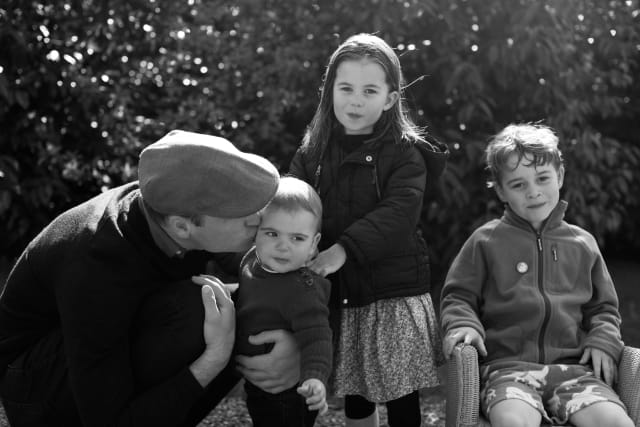 A new photograph taken by the Duchess of Cambridge has been released on Christmas Day.

The black and white photo shows the Duke of Cambridge kissing their youngest child Prince Louis on the cheek, while Princess Charlotte and Prince George look towards the camera.

The duke wears a flat cap as he holds on closely to his son in the photo, which was taken by the duchess, a keen photographer, earlier this year in Norfolk.

Princess Charlotte also appears to be holding on to her younger brother as she stands behind him, while Prince George sits next to them in a chair as he cheekily smirks at the camera.

This is not the first time Kate, one of the world's most photographed people, has gone behind the lens and released her own pictures.

The duchess was named as the new patron of the Royal Photographic Society earlier this year following her flourishing passion in photography.

A history of art graduate, the duchess has previously been praised for her photographic portraits of her children, Prince George, Princess Charlotte and Prince Louis.

Kensington Palace has often published photos taken by Kate to mark milestones in her children's lives, such as birthdays and first days at nursery.

The duchess began the tradition in 2015 when she took the first official portraits of Princess Charlotte, rather than hiring a photographer.