Imelda May urges people to donate to homeless charity 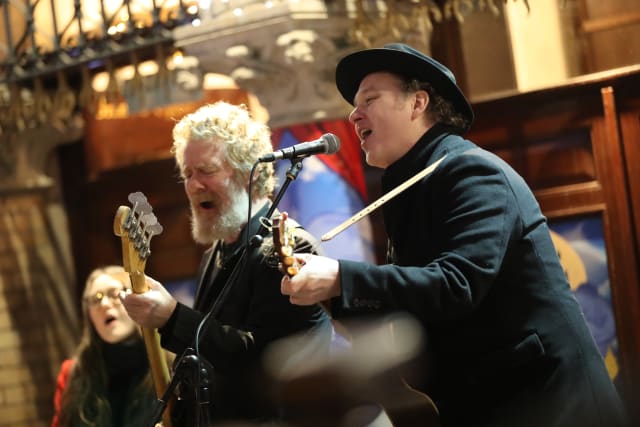 Imelda May urged people to donate what they could to a homeless charity as “everyone deserves a home”.

The Irish singer-songwriter joined dozens of other artist and performers on stage for the Christmas Eve busk in Dublin City centre.

Some several thousand people braved the cold outside Gaiety Theatre in Dublin’s South King Street in the heart of the city’s shopping district.

A number of volunteers from the Simon Community passed buckets around the crowd encouraging people to donate to the homeless charity.

Imelda May recited a poem called Home, before encouraging the crowd to dig into their pockets.

“Whatever you think this gig is worth then donate it to the Simon Community,” she said.

“I’ve donated, I always do.

“We all deserve a home.”

The Dublin singer said: “We organise this busking for the homeless and we send out about 100 messages and around 20 people show up.

“These are all the Dublin musicians who show up and give up their time.”

He kicked the event off with the song, Revelation.

Hudson Taylor, who have recently performed at Whelan’s and 3Arena, were joined onstage by their sister Holly and the Coronas’ Danny O’Reilly.

The Hudson brothers, who used to busk on Grafton Street, appealed to the public to give to the Simon Community.

They sang their newly released single, How I Know It’s Christmas.

Described as Ireland’s finest, Liam O Maonlai performed a number of songs as-Gaeilge (Irish), including a duet with Glen Hansard and Imelda May.

Previous years have seen U2’s Bono and The Edge performing.

Glen Hansard told the crowd that while some people might have been expecting particular singers to perform, they never know who will participate on the night.

All the artists sang Fairy Tale Of New York to bring an end to the busk.