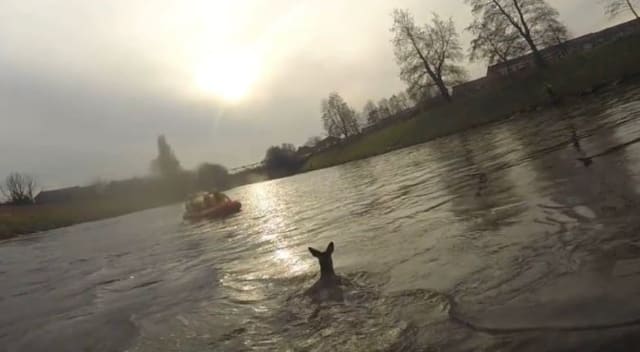 Four stranded deer have been named Dancer, Prancer, Dasher and Blitzen, after being rescued in Greater Manchester during the festive season.

The RSPCA said the deer were rescued on Tuesday after becoming trapped on a piece of land at the side of the River Irwell in Salford.

Officers believe they had become stuck after being washed downstream from the Kersal wetlands three days earlier.

Daring Dasher escaped and swam upstream, but the other three were reluctant to follow and were eventually saved in a four-hour rescue involving the RSPCA and Greater Manchester Fire and Rescue Service.

RSPCA animal welfare officer Steve Wickham said: "When we attended the scene one of the deer, Prancer, ran off and was able to get over the high fence.

"But Dancer and Blitzen were still stranded on the land so we launched the boats to encourage them into the river.

"We were hoping to guide them upstream by encouraging them to swim away from the boats in that direction, but both were struggling.

"So we managed to safely grab each deer from the river and hauled them on to the boat and took them back upstream where we were able to free them.

"They both ran off to the area we believe they live – so they are home for Christmas at least, and maybe we can go as far as saying we saved Christmas for these four deer."