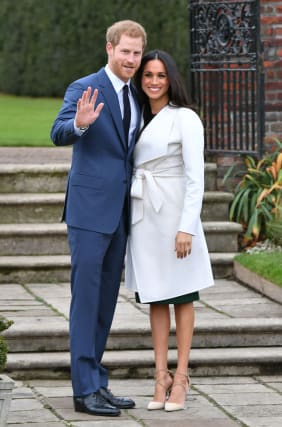 The Duke and Duchess of Sussex were pictured on a Christmas card with baby son Archie.

The black-and-white snap, described as “adorable” online, shows the smiling royals in the background seated by a Christmas tree while seven-month-old Archie takes centre stage in the fore.

The picture was taken by Meghan’s friend Janina Gavankar.

Gavankar, 39, is an American actress of Indian heritage who is best known for her TV roles.

She played a lesbian in one season of drama The L Word, a shapeshifter in fantasy horror series True Blood and a security agent on supernatural drama Sleepy Hollow.

Her film roles include 2014 rom-com Think Like A Man Too, starring Kevin Hart, Regina Hall and Taraji P Henson.

As well as her acting career, Gavankar is also a musician and was part of an all-female singing group called Endera.

Gavankar is also a fan of video games and has lent her voice to several, including shooter Far Cry 4 and Star Wars Battlefront II.

In her Twitter bio she describes herself as “actor. musician. geek.”

Gavankar, who has been friends with Meghan for more than 15 years, attended the 2018 Royal Wedding and said she did not announce her invite before being pictured arriving at Windsor Castle.

She told Town & Country magazine: “In the end, this was a wedding, an actual wedding, between two people, who are real people that fell in love.

“And people who know them know that this is a private moment that was not allowed to be private.

“It wasn’t a priority for me to have my publicist announce I was going. My priority will always be my friend. I’m not there for you, I’m there for her.”

Speaking in May last year, she also said she hoped the couple would get “as much privacy as possible”.

She added: “As much as the world will allow them, I hope for more. Truly.”

Gavankar was one of the lucky wedding guests invited to the after party and listened to Harry’s speech.

She said: “The speech that Harry gave was so funny, self-deprecating, filled with love, and that guy just has her back. I left feeling so solid for them.

“I walked away feeling so confident that these two will put their combined power into the world for good. They did it apart. They’ve done it apart their entire lives. Imagine what they can do together.”