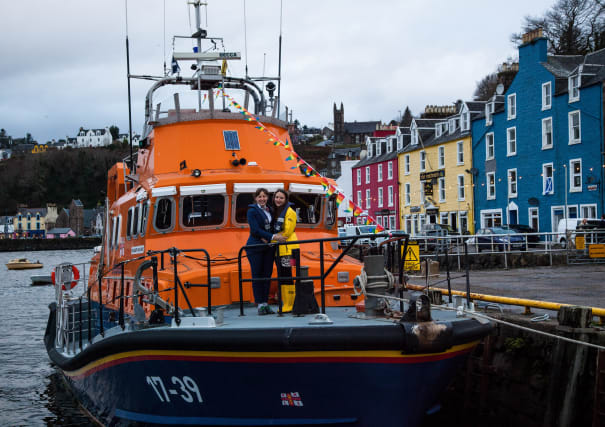 A lifeboat volunteer had her wedding blessing interrupted after she was called out to an emergency during the celebrations.

Rose Skelton rushed to Tobermory lifeboat station on the isle of Mull after her pager went off as she celebrated with her wife Nomi Stone.

Fortunately, there were more than enough crew and she was stood down and able to rejoin her wife and their families and friends.

The couple had their marriage blessed on Tobermory's Severn class lifeboat on Saturday in what is believed to be the first blessing of a same-sex couple to take place on an RNLI lifeboat.

They decided to have their marriage blessed there as Ms Skelton's grandfather John Lewis Leroy served as a volunteer crewman on the Dover RNLI lifeboat and his ashes were scattered by Tobermory's Arun class lifeboat Anne Lewis Fraser 20 years ago.

She said: "I had always wanted to be on the lifeboats after I grew up listening to my grandfather's stories about being on the Dover crew.

"Joining the Tobermory crew was one of the best things I've ever done and I'm so happy to see how the station has welcomed Nomi in as part of the family too.

"Having our marriage blessed here has been really special for both of us."

At the weekend history was made after @TobermoryRNLI played host to what is believed to be the first blessing of a same-sex couple to take place on an RNLI lifeboat. Volunteer crew member Rose Skelton & her wife Nomi Stone had their marriage blessed on the station's Severn class. pic.twitter.com/2pNBizM19S

Ms Skelton, a freelance writer and journalist, and Ms Stone, an assistant professor of poetry at the University of Texas, Dallas, were married in November 2018 in Philadelphia.

As many of their friends were not able to attend, they decided to celebrate their wedding again with a special lifeboat blessing and a ceilidh on Mull, where Ms Skelton has been on the crew since 2015.

After being piped down Tobermory's colourful Main Street by the Mull and Iona pipe band, they were met by a guard of honour formed of members of the lifeboat crew holding the traditional RNLI wedding oars at the pier where the lifeboat was berthed alongside.

The couple both read a poem written by their friend Daniel Jenkins called Mull and Iona and Tobermory RNLI coxswain David McHaffie then led a short blessing.

Mr McHaffie said: "Rose and Nomi are part of our lifeboat family and it was an honour to be part of their marriage blessing.

"All of us at the station wish them fair winds and following seas."