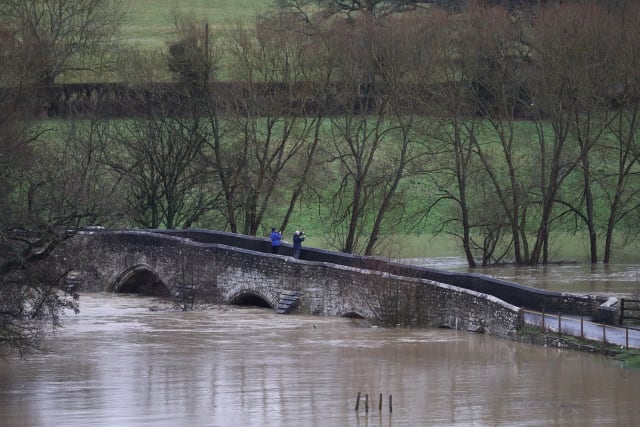 Politicians from flood stricken regions have called on Boris Johnson’s Government to invest more cash into better flood defences and set up a new emergency response unit, it has been reported.

Leaders from northern areas hit by floods last month have told the Guardian that the Government needs to establish a “Cobra for the north”.

The paper was also told that there was a need for “multimillion-pound investment” for flood defences to avoid a “catastrophe of the same scale” happening again.

The warnings come after further floods hit the south of England over the weekend, with around 90 properties flooded – about 60 in the South East and around 30 in Devon and Cornwall – according to the Environment Agency (EA).

Dan Jarvis, the elected mayor of the Sheffield City Region, told the Guardian that the Government needed to establish a “Cobra for the north” that would be chaired by a Cabinet minister and kick into action as soon as floods hit the region.

Cobra is the Government’s emergency response committee made up of of ministers, civil servants, the police, intelligence officers and others appropriate officials.

Mr Jarvis said the Prime Minister had privately agreed to help convene a dedicated emergency response group to react quicker to flooding after he was criticised for his slow response to the devastation.

He added this new unit should be chaired by Communities Secretary Robert Jenrick and bring together local and national government agencies for a detailed post-mortem of last month’s floods.

The Army was called in to assist stricken communities after towns and villages around Doncaster and Sheffield, and parts of the Midlands, were drenched by heavy downpours last month.

The Prince of Wales is due to visit South Yorkshire on Monday to meet the people and businesses affected by the flooding, as well as emergency services and volunteers involved in the recovery and rescue work.

Simon Greaves, Labour leader of Bassetlaw council, also told the Guardian that the system of allocating funding to flood defences was “rigged against” places such as Worksop in Nottinghamshire.

He added: “It would be a scandal if the Government response to this crisis is simply devoted to a mopping-up exercise and a grant here and a grant there when actually there are people’s homes that need to be saved from flooding in the future.

“There will be a need for multimillion pound-investment for flood defences without any doubt if we’re going to avoid a catastrophe of the same scale.”

A Department for Environment, Food and Rural Affairs (Defra) spokeswoman said: “Recent flooding in Yorkshire had terrible consequences for people and businesses.

“This is why we are investing record amounts to help protect communities across the nation from the threat of flooding, using both natural flood management techniques and traditional defences.

“We spend money where it is needed most – with similar funding heading to high-risk areas across both the North and South of England.”

Dozens of flood warnings are in place across England – bringing misery to travellers heading home for the Christmas period.

On Sunday night, there were 80 flood warnings stretching from the Lake District down to the south coast, with a further 192 flooding alerts – meaning there is a risk of flash flooding and standing water.

The EA warned that with more rain likely on Monday and Tuesday, the flood threat would continue for the next few days in southern and central England.

The Environment Agency has advised people to stay away from swollen rivers and not to drive through standing water as just 30cm of flowing flood water is enough to flood a car.

So far this autumn, rainfall records have been broken for South Yorkshire, Nottingham and Lincolnshire and across the country it has been the fifth wettest autumn since records began.