One dead after ‘fireball’ crash between bus and car 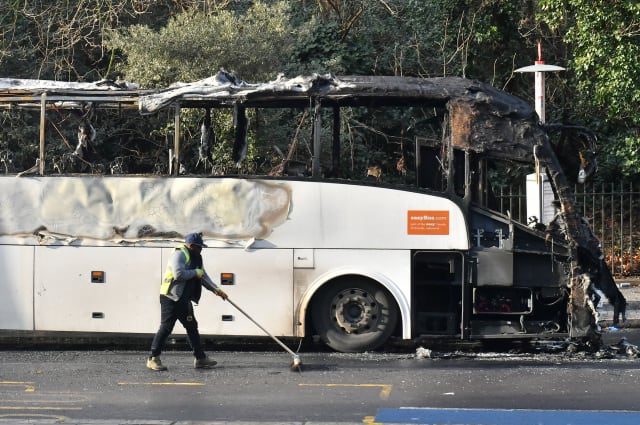 A 26-year-old woman has died after a crash between a rental car and a National Express bus.

The vehicles were engulfed in flames after the smash which happened in south-west London in the early hours of Sunday.

The driver of the car died at the scene and two others, including a bus passenger, were taken to hospital

Footage circulating on social media of the scene shows both vehicles on fire on Queenstown Road close to Chelsea Bridge.

Taken on Snapchat, police and ambulance crews can be seen trying to dampen the flames, which have engulfed both the coach and the car, and rescue people from inside.

Witnesses can be heard saying the vehicles "exploded" after they crashed into each other.

A spokesman for National Express said: "One of our vehicles on the A3 service from Gatwick to London Victoria was involved in an incident with a car on Queenstown Road in the early hours this morning.

"One passenger was taken to hospital and all other passengers were safely transferred to a replacement vehicle for onward travel.

"Emergency services attended the scene and we will continue to provide every assistance with the ongoing investigation.

"Our thoughts are with the family and friends of the occupant of the car, who sadly passed away."

A London Ambulance Service spokesman that despite the "best efforts of our medics, one patient sadly died at the scene".

"We took a second patient to a major trauma centre as a priority. We treated two further patients for minor injuries: we took one of them to hospital and the other was discharged at the scene."

Emergency services were unable to give any further details of the driver.