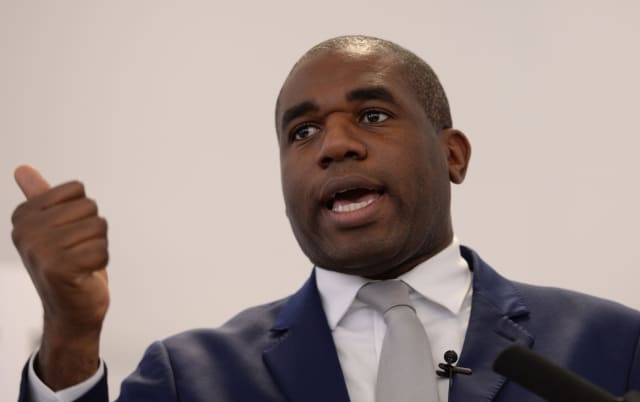 The race for the Labour leadership has heated up after two Remain-backing candidates hinted they could put their names forward for the top two jobs.

Long-standing Tottenham MP David Lammy gave the clearest indication yet that he was mulling entering the contest to replace Jeremy Corbyn as leader, who announced he would step down after Labour’s disastrous showing at the polls.

And Tooting MP Rosena Allin-Khan confirmed in an interview with the Sunday Times that she was considering entering the race for deputy leader.

In an article for the Observer newspaper on Sunday, Mr Lammy said Mr Corbyn’s “mind-boggling decision to abdicate leadership” and remain neutral on Brexit was one of the main factors behind Labour’s largest election defeat since 1935.

Mr Lammy said he wanted to see an end to “tribalism” in British politics, reform to the “unfair” voting system and a trial of universal basic income – a scheme where everyone in society is paid a small salary by the State.

The arch-Remainer, who was elected in 2000 and has more than 500,000 Twitter followers, said he would “consider over Christmas” which “Labour figure I believe is best-placed to lead this hopeful vision”.

If elected by members to the top job, he would become the first black or ethnic minority leader of the Labour Party.

Only shadow foreign secretary Emily Thornberry and shadow Treasury minister Clive Lewis have so far officially declared their candidacy, but more are expected to follow early next year.

Dr Allin-Khan, meanwhile, could be in the frame to replace former deputy Tom Watson, who stood down as an MP before the election.

She saw her profile rise during the election after Boris Johnson copied her idea of imitating a scene from Christmas comedy Love, Actually in a campaign video.

The practising GP and shadow sports minister, told the Sunday Times: “Is it something I would like to do? Yes, because I think I could bring a fresh, non-tribal approach.

“But I will have to have lots of conversations with my family and friends, and make a decision in January.”

Shadow equalities minister Dawn Butler declared her intention to run before the disastrous poll result was revealed on December 12.

Other expected rivals include shadow justice secretary Richard Burgon and shadow education secretary Angela Rayner, who is rumoured to be weighing up running on a joint leadership ticket, with friend and flatmate Rebecca Long-Bailey leading a parallel bid to be leader.

As possible leadership candidates tested the waters before declaring, factional in-fighting broke out between those on the left and the centre of Labour on Sunday.

Laura Pidcock, the Corbyn ally who lost her North West Durham seat at the election, tweeted that the legacy of New Labour and Tony Blair “still hangs around this party like a millstone”.

Her comments were made after Mr Blair – still the last Labour leader to win a general election – intervened last week, blasting the “misguided ideology” the party had pursued under Mr Corbyn.

Those from the New Labour era were quick to round on Ms Pidcock’s comments, telling her wing of the party they must “own” the loss of 59 Labour-held seats.

Ex-home secretary Jacqui Smith said: “I’m sorry you lost your seat but it was down to the unelectability (sic) of the leader and the project you championed.

“You need to own that rather than try to shift the blame to a leader and politics that actually managed to win and change Britain for the better.”

It was lost to the Tories on December 12 with a 1,144 vote majority, making it the first time the constituency has not been represented by a Labour MP since 1914.

The Sunday Times reported that a leak of “Labour’s secret list of target seats” at the election, a document allegedly shared with a trade union, showed the party targeted a number of Conservative constituencies in a bid to make gains.

Target seats such as Mansfield ended up with blue majorities of more than 15,000, while only Putney out of a list of 60 targets was a Labour gain on the night.