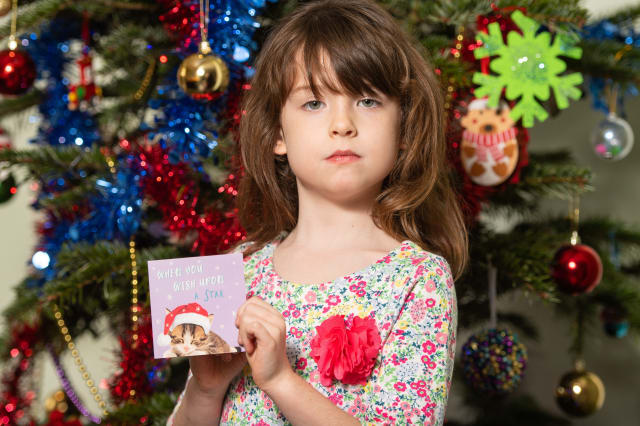 A family who found a message from a Chinese prisoner in a Christmas card said they thought it was a "prank" when they first read it.

Florence Widdicombe, age six, was writing cards to school friends last weekend when she found the note saying: "We are foreign prisoners in Shanghai Qingpu prison in China.

"Forced to work against our will. Please help us and notify human rights organisation."

The author asked the recipient to get in touch with journalist Peter Humphrey.

Florence, from Tooting, south London, told reporters: "We didn't open them on the day that we got them, we opened them about a week ago.

"We were writing in them.

"About on my sixth or eighth card, somebody had already written in it."

Her father, Ben Widdicombe, said he felt "incredulity" and thought it was a "prank" when he read the message.

He explained: "On reflection, we realised it was actually potentially quite a serious thing, so I felt very shocked, but also a responsibility to pass it on to Peter Humphrey as the author asked me to do."

Mr Widdicombe passed the details of the "strange occurrence" to the journalist via LinkedIn, and said the message arriving just days before Christmas made it "very powerful".

He said: "It hits home, there are injustices in the world and difficult situations that we know about and read about each and every day.

"But there's something about that message hitting home at Christmas, and so close to Christmas, that really does make it very poignant."

The family then reiterated the significance of the chance discovery to their daughter.

Mr Widdicombe said: "We explained that the person who wrote it was a prisoner in China and that the person felt the prison guards were being mean, making them do work, they felt really sad.

"They wanted to tell people about that, so they had written this note that we found."

The card with the message on it had been made at Zheijiang Yunguang Printing, and a Tesco spokeswoman told the PA news agency that the company was "shocked" and had shut down operations at the facility.

"We would never allow prison labour in our supply chain," she said.

Tesco donates £300,000 each year from the sale of its cards to the British Heart Foundation, Cancer Research UK and Diabetes UK.