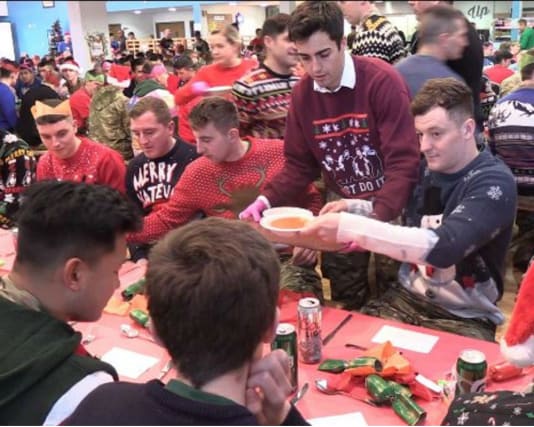 The soldiers of the Co Antrim-based 2 Rifles have enjoyed a Christmas celebration before gearing up for their 2020 deployment to Kabul.

There were races in improvised go karts around Thiepval Barracks in Lisburn before the lower ranks were served Christmas lunch by their officers.

The day of fun came just months before they fly to the Afghan capital to become the latest battalion to join Operation Toral to help develop the military capability of the Afghanistan government’s armed forces.

In March, 2 Rifles, which attracts soldiers from across the UK, undertook intensive training in challenging climate and terrain in Kenya.

Since then they have been continuing their preparations for deployment next spring.

Commanding Officer Sam Cates said a lot of fun had been had on the last day before their Christmas break, but in January the focus will be firmly on the final preparations for deployment.

“It’s a bit of a tradition across the army for the officers to serve our soldiers a Christmas lunch as part of our close-down celebrations,” Lieutenant Colonel Cates told the PA news agency.

“We have had a great morning with a bit of fun and our carol service.

“We’ll be enjoying the Christmas break with our families and then straight back on the horse so to speak.

“We start off in January with more training; some company level training, more range packages and on the vehicles, and then we go to our rehearsal exercise in February before deploying later in the spring.”