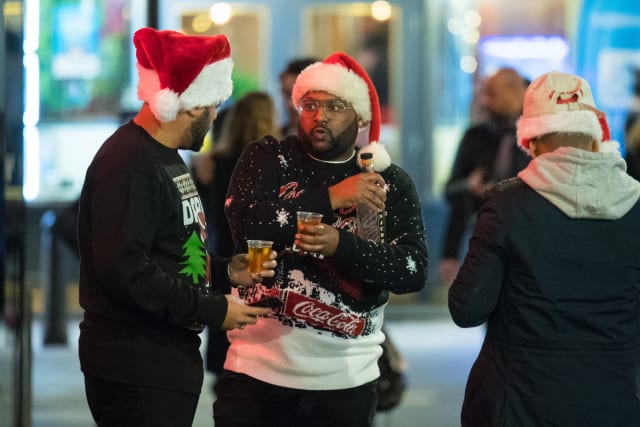 Mad Friday brought carnage to city centres across the country, with some police forces reporting a spike in arrests as they battled to keep control.

The last Friday before Christmas is so named because it is the time when most of the UK’s workforce downs tools and mark the start of the Christmas break with a few beverages.

It is also known as “Black Eye Friday” because of the number of drunken accidents and fights.

It certainly lived up to its name for one officer with Cleveland Police, who was left with a bloody and swollen eye after being repeatedly punched.

Three other officers were elbowed and spat at while on duty, the force said.

It received a total of 315 emergency calls overnight and 31 people were arrested.

Chief superintendent Emily Harrison said: “This level of abuse towards our officers is disgusting and the force will not tolerate it under any circumstances.”

She added: “Each of our officers put their life on the line to protect people living in our communities, they work round the clock every day of the year.”

Elsewhere in Middleton, Greater Manchester, two officers were taken to hospital after being attacked while breaking up a fight at 2.35 on Saturday morning.

Revellers in Newcastle were more good natured – although one woman risked giving herself a black eye with her acrobatic stunts against a tree.

Lots of drinkers swapped sweaters for Santa suits for a few festive pints.

Not to be outdone, a team of Mrs Clauses enjoyed a sing song with the ringleader conducting from a bench.

Down in London, Met Police officers were out in force to stop things getting out of hand.

While not as committed to the growing tradition of Mad Friday, a few Londoners donned their Christmas jumpers for the occasion.