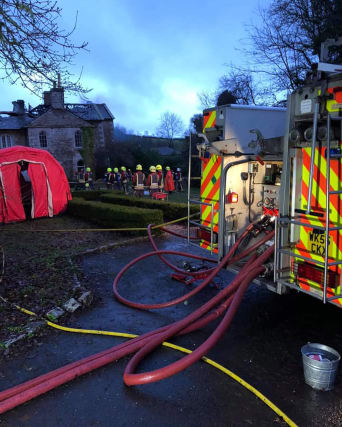 An 18th century Cornish manor house has been damaged in a blaze that needed 12 fire engines to bring it under control.

Three crews from Lostwithiel, Bodmin and Fowey were called to the detached property in Milltown at 8.53am on Saturday after reports of smoke.

The crews found fire in the first floor and second floor roof space and initially sent in firefighters with breathing apparatus, although they were withdrawn at around 10am over safety fears.

Over the next two hours, a further nine engines were dispatched to the scene.

“Relief crews have been sent to the scene and 4 pumps will remain on scene throughout the night.

“This was an extremely challenging job for crews on scene, a very well done to all personnel and thank you for your efforts.”

A representative from the station told the PA news agency the cause of the blaze is currently unknown.

They said no one had been inside the property at the time of the fire and there had been no casualties.

They added the property was likely to be listed because of its age.