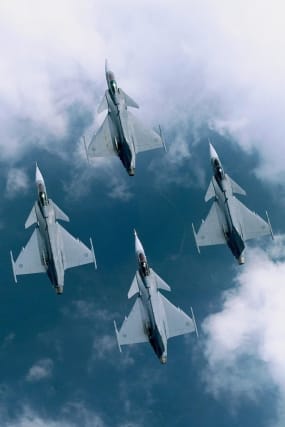 The family behind UK defence company Cobham has attacked the Government over its decision to give the go-ahead to a £4 billion takeover of the business by a US private equity firm.

A merger between the Dorset-based manufacturer and US firm Advent was agreed in July but was delayed due to national security concerns.

The Government signed off the takeover on Friday after Advent proposed a number of legally binding obligations to protect the UK’s interests.

These include the ongoing protection of sensitive Government information and requiring prior notice to the Ministry of Defence and Home Office on any future plans to sell the Cobham business.

Lady Nadine Cobham – daughter-in-law of the firm’s founder Sir Alan Cobham – said the decision was “deeply disappointing” and accused the Government of “handing control away”.

It was floated in 1985, although the family maintained a large stake.

The deal with Advent was criticised because of the private equity firm’s lack of experience in the sector and the short-term mindset of investment companies.

The MoD also feared the security of military information held on the firm’s systems could be undermined if Advent decided to sell off sections of the business.

Lady Nadine said: “This is a deeply disappointing announcement and one cynically timed to avoid scrutiny on the weekend before Christmas.

“In one of its first major economic decisions, the Government is not taking back control so much as handing it away.

“In Cobham we stand to lose yet another great British defence manufacturer to foreign ownership, through a takeover that would never have been approved by the Americans, French or Japanese, all of whom have taken steps recently to raise protections for their own defence sectors.”

Business Secretary Andrea Leadsom, who led the Government consultation process, said she was confident the merger would not compromise national security.

Ms Leadson said: “This decision has been meticulously thought over, and I have taken advice from the Defence Secretary, the deputy national security adviser and Government officials across multiple departments. I have also met with both of the companies on several occasions, as have several senior members of my department.

“Having considered the consultation responses and further advice from the Defence Secretary, I am satisfied that the undertakings mitigate the national security risks identified to an acceptable level and have therefore accepted them and cleared the merger to proceed.

“While trade and investment play an important part in the UK economy, when intervening in mergers on national security grounds, I will not hesitate to use my powers to protect national security, if it is appropriate to do so.

“Separately, the companies have given a legally binding commitment that there will be significant protection of jobs and have also agreed with the takeover panel that Cobham’s headquarters will remain in the UK, that the Cobham name will continue to be used, and that there will be a guaranteed level of R&D spend.

“This will secure the future of Cobham and the important role it plays in our world-leading defence sector and economy.”