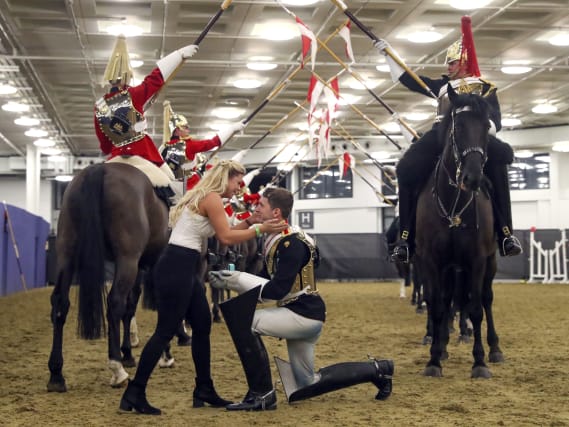 A Household Cavalry Trooper decided only the royal treatment would do when it came to proposing to his girlfriend.

Jonathan Adams, from Ipswich, roped in his fellow soldiers and their four-legged friends to form a guard of honour so he could propose to Megan Baldry.

The Household Cavalry has been performing every night during the six days of the London International Horse Show at London Olympia.

On Saturday evening after the show, the regiment lined up in the practice ring with their spears crossed so Trooper Adams could pop the question.

There was just one problem – his thigh high dress uniform boots stopped him getting properly down on one knee.

An onlooker told the PA news agency: “Someone took his horse from him and his girlfriend was led in and he got down on one knee – or as far as he could in his boots.”