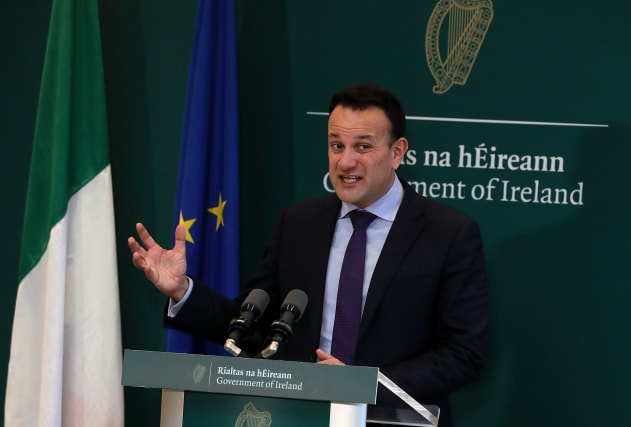 The Taoiseach has expressed determination to secure a deal to restore powersharing in Northern Ireland.

Leo Varadkar said it was important that any new executive formed in Belfast was inclusive, and included the three smaller parties, as well as the DUP and Sinn Fein.

The UK and Irish governments have singled out the DUP as the party standing in the way of a pre-Christmas deal.

The region’s largest unionist party has said it will not be “bounced” into a “quick fix” accord that falls apart when tested.

There is now no expectation of the talks process restarting this side of Christmas.

Mr Varadkar said: “As far as the governments are concerned, we’re really determined to do everything that we can to get the parties together and have an inclusive administration in Northern Ireland.

“It has to involve the DUP and Sinn Fein of course as the biggest two parties.

“But we want to have the other parties involved too – the SDLP, Alliance, which did very well in recent elections, and also the UUP, so we’re going to work as hard as we can over the next couple of weeks to get that done.”

Proposals to reform a contentious cross-community voting mechanism in the Assembly represents a key sticking point in the negotiations, with the DUP unhappy about what is being countenanced.

The DUP is also seeking changes to ensure the devolved parliament is more stable in future and cannot be readily pulled down.

Proposed legislative protections for Irish language speakers are also a crucial element of the negotiation process.

After talks broke up on Thursday night with the DUP being singled out as the barrier to agreement, Secretary of State Julian Smith held talks with party representatives in London on Friday morning in an attempt to navigate a way forward.

“I am confident that we can move things forward,” he tweeted afterwards.

DUP MP Sammy Wilson was among those who met Mr Smith.

He said: “We wanted to move forward and have as quick an outcome to these talks as possible but we will not be simply accepting any kind of deal just to satisfy his desire to have the Assembly up and running.”

He told the BBC’s Radio Ulster he did not want the process to drag on.

He added: “We are not prepared to go for a quick fix which then falls apart at some point in the future.”

The DUP has insisted any deal must be “fair and balanced”.

The petition of concern voting mechanism was designed to protect minority rights in the Stormont institutions but politicians have accused each other of misusing it for their own ends.

The late Sinn Fein deputy first minister Martin McGuinness’ resignation in protest at the DUP’s handling of a green energy scheme ended powersharing in 2017; lengthy negotiations have failed to produce a resurrection.

Extra money for the region’s crisis-hit health system and other projects is on offer from the UK Government if a deal can be struck.

The DUP has said it has not seen the details of any financial offer.

On Friday, Sinn Fein president Mary-Lou McDonald said nobody was expected to sign up to a blank cheque but it was in everyone’s interests to make progress.

“Now is the time of truth, we need to get the institutions of government back up and running,” she said.

The republican leader added: “We want every party to step up to that ground with us and recognise that at a time of acute political challenges, at a time when clearly in particular our health services are under considerable strain, there is now a duty and obligation for people to lead.

“This is about leadership. This is about creating a deal that recognises people’s rights and allows us to get the institutions back up and running.”

She said: “There comes a moment when political parties and political leaders have to lead and that is the moment we are at now.”

Mr Wilson said it was strange the UK Government had been unwilling to blame Sinn Fein for its role in the crisis but suddenly Mr Smith was “pointing the finger” at the DUP.

“If he had a rush of blood to the head yesterday hopefully now he is going to go back to being impartial on these issues,” he said.

The Government has imposed a deadline of next month for agreement or fresh Assembly elections could be called.