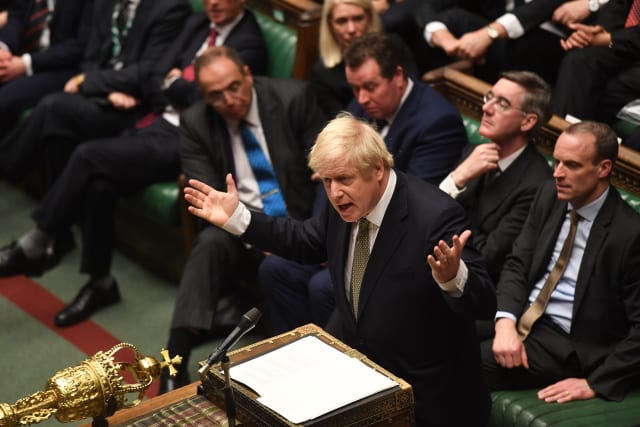 The FTSE 100 capped off a week of growth with another positive, but slow, showing on Friday, as the markets prepared for the Christmas trading period.

It represents a 2.5% rise since the markets opened on Monday.

It comes as MPs on Friday afternoon passed Prime Minister Boris Johnson’s Brexit bill, setting a January 31 date for the UK to leave the European Union.

But markets were largely unaffected, having already expected the vote to be a success for Mr Johnson.

The Office for National Statistics (ONS) said that the British economy grew by 0.4% in the last three months. Previous estimates had put the figure at 0.3%.

“With the pound down over 2% across the week, today’s vote had been fully priced in, explaining why the reaction from sterling today was minimal. Instead sterling is riding higher following the better-than-forecast GDP release earlier in the session,” Ms Cincotta said.

In company news, the board of Just Eat is backing a plan to merge with Dutch firm Takeaway.com, as a bidding war for the British food delivery giant reaches its final stages.

The company said it would support a new offer from Takeaway of 916p per share after it and rival suitor Prosus made their final bids on Thursday.

The investment giant has agreed a deal to control the £267 million Income Focus fund, two months after it was frozen by administrator Link Fund Solutions.

Anglo-Dutch oil giant Shell has said it expects to be hit by an impairment of up to 2.3 billion US dollars (£1.8 billion) for the year.

In a trading update on Friday, it also marginally trimmed back its forecast for quarterly oil production sales and said it has seen “marginally lower” margins in its chemicals business.

Stonegate’s £1.28 billion acquisition of rival pub firm Ei Group appears to have moved closer after it offered the competition watchdog undertakings to address concerns over the deal.

The Competition and Markets Authority (CMA) said “there are reasonable grounds” for believing that Stonegate’s undertakings, or a modified version, could “remedy” its fears.

The price of international oil standard Brent crude dropped 0.89% to 65.99 dollars per barrel.