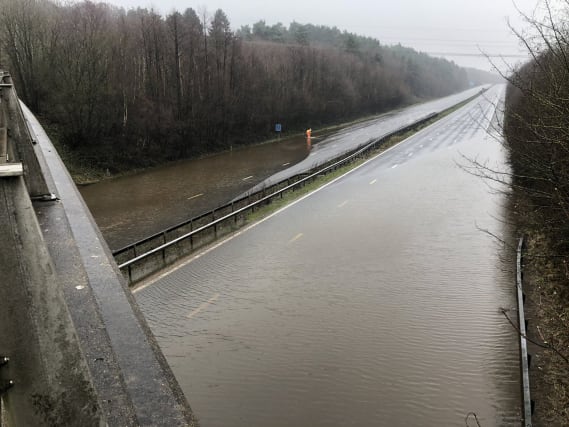 A motorway was partly closed and several rail lines were blocked.

The Met Office issued a severe weather warning for more heavy rain and showers across southern England from 12.01am Saturday until noon on Sunday.

It is forecasting up to 30mm of rain in parts of the South while the warning is in place.

A Met Office spokeswoman said: “Given the fact that there has been a lot of rain in southern England already this week, there is potential for flash flooding and difficult driving conditions, especially as it is a busy weekend in the run-up to Christmas.”

The M23 was closed between junctions 10 and 11 in West Sussex for around eight hours after a nearby watercourse burst its banks.

Sussex Police described driving conditions in the region as “miserable”, and said there was “a lot of standing water on the roads”.

Devon and Cornwall Police said flooding across the force area made “a number of roads impassable” and it urged motorists to take extra care and avoid driving into standing water.

Highways England urged motorists to adapt their driving for wet weather by slowing down, keeping well back from the vehicle in front and easing off the accelerator if steering becomes unresponsive.

Train passengers were urged not to travel between Brighton and Gatwick Airport on Friday morning, with a heavily reduced service in place by the afternoon.

The operators warned that replacement buses were “heavily disrupted due to ongoing road traffic conditions”.

No Southeastern trains were able to run between Maidstone West and Strood due to a tree on the line and a landslip.

John Halsall, managing director of Network Rail’s southern region, said the combination of one of the wettest autumns since records began with a month’s worth of rainfall in the past five days has put the rail network “under enormous pressure”.

He went on: “We have hundreds of colleagues out in force across the region to clear debris from drains, pump away excess water and clear mud and trees from the tracks.

“Our passengers have had an awful week of disruption, so I know an apology isn’t enough. But we are working tirelessly to deliver the best service we can during these challenging circumstances.”

Passengers were advised to check with train operators or visit nationalrail.co.uk for the latest journey information.

Some 74 flood warnings – where flooding is expected – are in place for England, alongside 229 flood alerts, which warn flooding is possible.