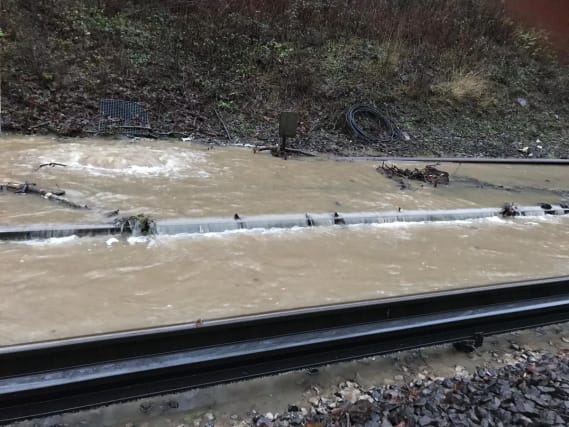 Heavy rain and flooding is causing chaos for thousands of people embarking on a Christmas getaway.

Road and rail journeys are being disrupted in parts of southern and eastern England on one of the busiest travel days of the year after some areas saw nearly 2in (50mm) of rain in just 36 hours.

Severe Met Office weather warnings for heavy rain indicate that water on roads will cause delays in some areas on Friday, Saturday and Sunday.

Met Office meteorologist Mark Wilson said: "There could be localised flooding. Stay in touch with the forecast, there could be delays to transport."

Devon and Cornwall Police said flooding across the force area has made "a number of roads impassable".

They urged motorists to take extra care and avoid driving into standing water.

Train companies issued an alert stating that they "strongly advise to not travel" between Brighton and London as flooding in West Sussex blocked the line between Haywards Heath and Three Bridges.

Gatwick Express services were suspended on what is the busiest day of the festive period for UK airports.

Southern and Thameslink said rail replacement buses have been ordered but warned they are being delayed "due to road conditions".

Some 47 flood warnings – where flooding is expected – were in place for England on Friday morning, alongside 196 flood alerts, which warn flooding is possible.

Three stretches of motorway identified as having the longest expected delays were: