Queen arrives by train in Norfolk for Christmas break 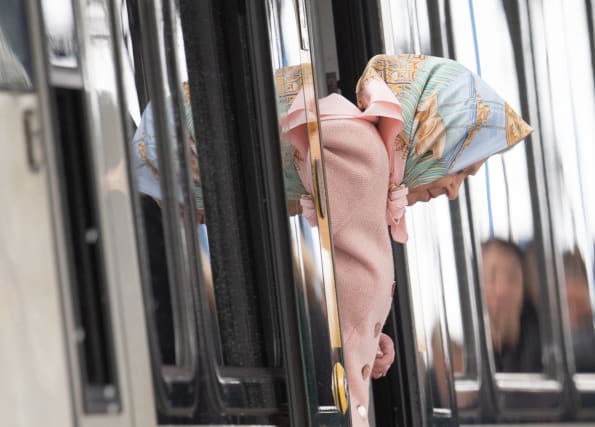 The Queen has arrived in Norfolk by train to begin her Christmas break the day after she delivered her speech at the State Opening of Parliament.

She caught the 10.42am Great Northern service from King’s Cross station in London and arrived at platform two in King’s Lynn on time, at 12.31pm.

The 93-year-old monarch, carrying a black handbag and wearing a salmon pink coat and patterned headscarf, stepped from the front carriage of the train onto the platform.

She briefly mingled with passengers before she was escorted through a side exit known as the Royal Gate to a waiting Range Rover.

Sandringham, the Queen’s private estate in Norfolk, is a 30-minute drive from King’s Lynn.

Passenger Monika Saganowska, 25, who boarded the train at Watlington, the stop before King’s Lynn, said she was unaware the Queen was on board until she arrived at King’s Lynn and saw police on the platform.

She said it was “quite exciting” to discover that the Queen had been on the service, and she was surprised to learn that the monarch had taken public transport.

“I always thought she would have some kind of a private train or at least a carriage or something, but I didn’t know that she was taking the public train which I think is great.”

The Queen and the Duke of Edinburgh, 98, who spends much of his time at Sandringham since he retired from public duties in 2017, will be joined by other members of the royal family for part of the festive period.

Prince George and Princess Charlotte could attend the service for the first time this year, according to reports.

However, the Duke and Duchess of Sussex will be absent, instead opting to spend their first Christmas as parents with the Duchess’s mother Doria Ragland.

Reports have suggested that the Duke of York, who has had a tumultuous end to the year after his disastrous appearance on the BBC’s Newsnight programme, may join the Queen at church.

His attempt to explain his relationship with convicted sex offender Jeffrey Epstein backfired and he was heavily criticised for showing a lack of empathy towards Epstein’s victims and remorse over his friendship with the disgraced financier.

In recent years the Queen has been driven by chauffeur to the church on December 25 while other family members walk the short distance from Sandringham House to join her.