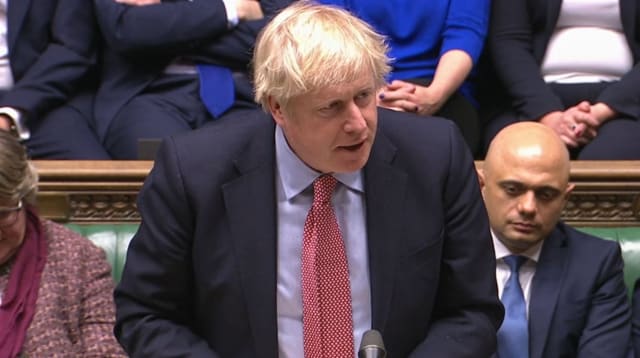 Boris Johnson has claimed his Government is “absolutely committed” to allowing unaccompanied child refugees to be reunited with their families after Brexit.

The Prime Minister was accused of using key Brexit legislation to “bring up the drawbridge” and stop the right of unaccompanied minors coming to the United Kingdom.

The revised wording of the Brexit Bill removes a Government commitment to strike a deal with the European Union so child refugees can be reunited with their family in the UK, even after free movement ends.

This has led to the Government being accused of reneging on the so-called “Dubs amendment” allowing greater flexibility in such matters.

The previous terms, pushed for by Lord Alf Dubs – who fled the Nazis as a boy, had been accepted by Theresa May when she was in Number 10, but her successor Mr Johnson has been accused of watering down the commitment to simply requiring a minister to “make a statement” to Parliament.

Lord Dubs Tweeted on Friday: “Appalling and deeply distressing that the government is threatening to scrap the right of refugee children to be reunited with their families here.

“These are among the most vulnerable children imaginable – unaccompanied and alone. We’re not talking large numbers. These children simply wish to find safety with their families, who are able and willing to support them.

“Parliament has already shown it supports family reunion for refugee children and I have faith it will do so again. Attempts to strip these children of their right to be with their loved ones will be resisted in the Commons and the Lords.

“And I really don’t buy the government’s claim that this new position is just for the purpose of negotiation. Vulnerable children are not bargaining chips. We should not be exploiting their misery for political purposes, but defending them as our own.”

SNP Westminster leader Ian Blackford labelled changes to the European Union (Withdrawal Agreement) Bill a “disgrace” and said it showed “who are the real separatists”.

For Labour, Jeremy Corbyn said it was “one of the most appalling sections” of the legislation and told MPs: “Coming to up to Christmas, shame on this Government for abandoning children in this way.”

She said that, while Mr Johnson is right to say he has won a mandate to get Brexit done, he has “not earned the right to shoehorn into this legislation measures that are a direct attack on some of the most vulnerable children in the world”.

The Government, as part of a re-drafted Brexit Bill, appears to have rowed back on an original commitment to strike a deal with the EU so child refugees in Europe can continue to be reunited with their families in the UK, even after free movement ends.

Ms Nandy told the Commons: “If he thinks that people in towns like mine who believe that we should deliver Brexit want to see us turn our back on decency and tolerance and kindness and warmth and empathy, he is wrong.

“Will he take these measures on child refugees out of this Bill?”

Mr Johnson replied: “She is wrong on this point. We remain absolutely committed to ensuring that we continue in this country to receive unaccompanied children, as we have done.

“I reject the idea that our proceedings must be somehow overseen and invigilated by the EU and measured against their benchmarks.”

For the SNP, Mr Blackford said Mr Johnson had “clearly not read his own Bill and explanatory notes” when it comes to the issue.

He highlighted the relevant clause in the Bill and said: “That is the harsh reality, and I say to MPs opposite: think very carefully as to what you’re about to do.

“Because you’re just about to bring up the drawbridge and stop that right of unaccompanied minors coming to the United Kingdom.

SNP justice spokeswoman Joanna Cherry asked: “Can the Prime Minister tell me why he is making this mean-spirited and nasty move?”

Mr Johnson replied: “I’m afraid the honourable lady has totally misunderstood or possibly misrepresented the purpose of what we are doing here.

“We remain proud of our work in receiving unaccompanied children. We’ll continue to support fully the purpose and spirit of the Dubs amendment but this is not the place, in this Bill, to do so.

“The Government remains absolutely committed to doing so.”