Ireland and UK trade deal has been made more difficult, says Varadkar 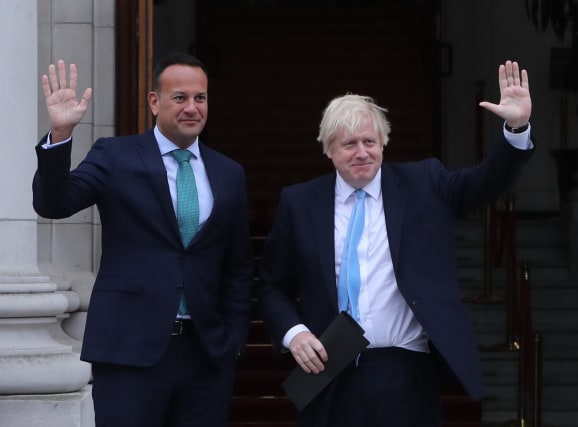 A trade deal between Ireland and the UK has been made more difficult because the Prime Minister is “fixed on a harder Brexit”, the Irish Premier has said.

Speaking at a media briefing in Dublin, Leo Varadkar said that his government’s top priority in the new year will be guiding Ireland through the UK’s exit from the UK, due on January 31.

Mr Varadkar says the deal negotiated with the UK gives Ireland important guarantees, including preventing the re-emergence of a hard border between North and South, however trade remains an open question.

“What is still, of course, wide open, is what will happen on trade, when it comes to the future trading relationship between the EU and Ireland on one hand, and the UK on the other, and that is really so important,” he said.

“This is existential for our economy, because so much of our economy is dependent on trade, particularly the agri-food sector but also the manufacturing sector as well.

“It is going to be difficult to secure a good trade deal for Ireland, principally because Boris Johnson has fixed on a harder Brexit than we anticipated under his predecessor, or at the time of the referendum, and that is one where he talks very much about divergence.

“You’ll see what’s happening in Westminster at the moment, where the guarantees on workers rights, for example, are being deleted from the agreement, and that’s a real concern for us.

“While we want free trade and unfettered access to the British market, we do want there to be a level playing field.

“A common set of standards that we all sign up to, we don’t want to trade with a Britain that undercuts us, that has lower financial standards, has lower product standards, lower health and safety standards.

“The whole point of the European Union has been to have convergence and fair competition, more competition, but also people converging upwards in terms of labour rights and standards, environmental standards, over the years.

“The British Government have to work very hard to maintain the unity of European 27 to make sure that we have a level playing field on the common core standards.”

Mr Varadkar added he was still concerned about Brexit, despite the Withdrawal Agreement being ratified.

“The harder approach being taken by Prime Minister Johnson is a risk to us and that is evident,” he said.

“At the same time, what he has said is that he wants to have exactly what we want, which is quota-free, tariff-free access to each other’s markets with the minimum amount of bureaucracy and checks.

“What he has said is that he doesn’t want there to be alignment. However there are different ways of achieving things than alignment.

“There is also equivalence and there is also the possibility of a common minimum floor of standards.

“That is the kind of thing that we are going to have to work on.

“It is going to be a tall order to get that agreed and ratified by the end of 2020.”